Grant Morrison once stated "We will see superheroes in our lifetime", and it looks like he's right.
These two charcaters, who can be found on the following links are cleaning up the "mean streets" of Indianapolis

They call themselves Dr. DiscorD and Mr. Silent, obviously the press release is from the former and not the latter of the two. 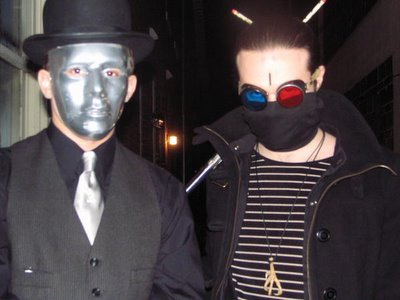 "so tonight is the first night in a new era here in indianapolis. the dawn of the age of superheroes. after realizing the total lack of justice in the world, my friends and i have decided to become superheroes in order to balance this fracturing planet of ours. tonight, with my partner in crime fighting "Mr. Silent", we went around the city helping people and stopping fights,drunk drivers,and a group of young dumb kids hitting an old woman's car."
And that's why they're not known as Doctor Proper-Punctuation and Mr Grammar.

After researching the two, I came across zero column inches in the National Press, in fact, I could find no news about them in the Indianapolis area, leaving me to think that there bid for notoriety has gone pretty much ignored except amoungst the comics industry. Something related to comics gets ignored by the mainstream press? Big surprise there.

On Mr Silents MySpace profile (although they both have their mouths covered?!?), he states himself as being a student in Tae kwon Do, Karate, Kendo, Mudo Kwan and many more, and for his sake I hope he's right. And bullet proof. He goes on to say:
"originally,we just thought it'd be funny to go out as superheroes and "fight crime" as a sort of street theater…but after the first hour and the sheer exhilaration of it all,we completely changed our mind. there are real problems,and no one wants to deal with them. some one has to do something." (punctuation and grammar not changed for comical effect)

Doctor DiscorD (3D for short) seems to take the whole thing with a pinch of salt, and I think he's trying to get laid and doesn't no any better. At a strapping 6'5" (apparently), he cites his influences as Rorschach, his status as Swinger and also cites that he smokes and drinks. Which for my money, throws him more into the "anti-hero" category. But then again, Mr Silent reads more like a costumed hero than a super-hero, lack of powers and all.
The Doc had this to say:
"Some say i'm just your average schizoid antihero personality type on the verge of a mental breakdown. Some say i'm already crazy...AND YES!!!(thanks for suggesting) "You're mad.."
of course im fucking mad,man!!
IM MAD AT BAD!
Aren't you???
what do we consider "CRIME" you might ask...we dont care about victimless crime like drug use or people buying prostitutes. the kind of CRIME we're talking about is the kind that makes little old ladies afraid to leave their houses.
the kind of CRIME that makes single mothers afraid to walk to their cars at night."
He then goes on to encourage others to don masks and go out at night to fight crime.

This is why I don't have a MySpace page.
And this is why I never take Grant Morrison too seriously.

They are not the only case of "super-heroes" in recent memory. Cases of Batmen and Spider-men were sighted in London over the last few years in various locations protesting for more rights for Fathers in the case of marital seperation, and a great way of making yourself look like a responsible adult is to climb up London bridge dressed as Spidey. It seems America is by no means more vaccinated against costumed idiots than we are.
http://www.vicnews.com/portals-code/list.cgi?paper=36&cat=23&id=569984&more=

Maybe these new superheroes are actually trying to cast themselves in this: "Who Wants To Be a Superhero?, a six-episode, hour-long reality competition to find a real-life superhero who will be captured in a comic book by Stan Lee." Sounds amazing.

At least we keep the wrestling indoors, if we were to walk down the street at night dressed as "wrestlers" I'm sure we'd take a kick in or two.
Posted by Sid at 2:19 pm

If that is Dr. Discord then hey.

And no, it doesn't "burn" at all, I have never been one for infamy or cult of personalities. I'm just arrogant.

"Doctor DiscorD (3D for short) seems to take the whole thing with a pinch of salt, and I think he's trying to get laid and doesn't no any better."

Hands up, you got me!

Is crime fighting always this easy for you?

Wow, Doctor Discord Vs. Typeface would be awesome, someone ring Marvel.

By covering your mouth you look like Mr. Silent, shame that's not the case.

Hah, only kidding, I really have no beef with you whatsoever, you do your thing and thats cool with me. It is a source of amusement to me, but I'm sure people feel that way about me and that's fine - couldn't care less.

wouldnt those goggles give you a headache after a while?

*nods* i found some paper 3-D glasses at work one day and wore them untill i felt too sick to keep them on anymore ~~ i lasted about 2 minutes. they made the customers look MORE horrible... (O___O) *hide in corner~~*

Life qupte that I like "I am not my sister's keeper, I am mysister. To see more of my life quotes and dish on Starting Over visit me at ##http://www.starting-over-tv.com##