We’ve had characters die, sexual preferences revealed and above all a second series when a lot of people were afraid it had finished for good. But now it’s hit its biggest shake up yet. The creator and writer is leaving
along with it's artist
---

After working together on the series for more than four years, Adrian Alphona and I will be leaving Runaways with Issue #24. 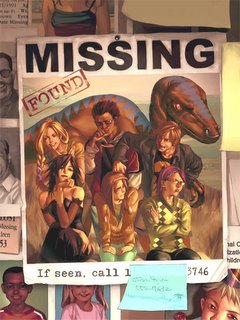 And no, this is absolutely not because of creative differences. I love editor Nick Lowe like a kid brother, and Joe Quesada and everyone at Marvel have obviously been nothing short of insanely supportive of our little book since the first page of the first issue.

This was entirely my idea. While Y: The Last Man and Ex Machina have planned endings, I've always said that I hoped Runaways would last forever, long after I left the series. I never wanted Runaways to become a vanity book that was dependent on its original creators' involvement; I wanted our kids to be able to eventually run away from us, and find new life apart from their "parents."

I can say with a great deal of confidence that these next five issues are the pinnacle of the series, and Adrian and I decided that the best thing for the Runaways would be to hand them off to new creators on this high note, rather than risk overstaying our welcome until we ran ourselves--and the book--into the ground.

I love these characters more than you can possibly imagine, and I swear I wouldn't abandon them unless I knew for a fact that they were going to end up with the very best creative team possible. Marvel will be announcing that new team in about a week, and to say that you guys will be thrilled is probably an understatement.

As for Adrian and me, we've already started talking about possible new projects to work on together. I'd really like to take time to give birth to a few more creator-owned books, and I hope you Runners will follow us wherever we end up next.

No one thought Runaways would last six months, but after nearly forty issues and a few Eisner nominations, our sales are still going up (especially with the digest collections in bookstores), making our series one of the most successful comics starring all-new characters to be launched by any major company in recent memory. I'm extremely proud of the entire Runaways team, some of whom will definitely be sticking with our kids, and I'm so grateful to all the undyingly loyal readers out there, the best group of friends a comic book could hope for. 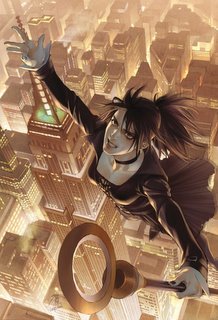 This series has been exceptional in places, the first 18 issue series alone tells a fantastic contained story (well minus the vampire). This is sad news; I’ve been picking this up in digest form, which has really helped the series, so I guess I only have two volumes to go till its all change.

I’m not sure if I want it to continue straight of the bat with an issue twenty five, I think it would be much more in suit to the series to give this chapter of the story an ending, not definitive, just something like we got with the first 18. Then let a new team pick it up in 6 months or so, give it time to breath. I mean sooner or later you have to face what you’re running away from

I mean don’t get me wrong, I don’t think the book should die when it’s creators leave, just let it carry on a little while after. Let the current team go out on top. Then start it all up again as the third series.

Now as for the new team? Well there’s a certain Mark Bagley finishing with Ultimate Spider man soon, matching him up with a writer like Sean McKeever or even Zeb Wells. I think Joss Weadon would be a good writing fit, and he’s gone on record saying he loves the characters and series, but this books reputation really doesn’t need a writer who’ll get it out bi monthly. The digests for this have done so well, they were even in my old sixth forms library. It needs a creative team who can keep the ball rolling, and for art Bagley is certainly a good fit.

And in case you missed it, I want Bagley to draw it
Posted by Ryan at 11:09 pm

I love Runaways, but it is a B-list title even if the writer is A-list, so I wouldn't expect to see any A-list talent go onto this book (not that I wouldn't like Bagley on it).
Let's put Runaways into perspective: it launched as part of the super ill-fated Tsunami line, wherin not even a big named title like Venom couldn't break 25 issues. Most titles fell to the way-side after 10 issues or so, except for Mystique, which thrived under Vaughan and then died a death when he left.
I suppose it would be nice if new creative talent came onboard in the spirit of this unlikely success, but I suppose they can't afford to take the risk.
As for the series starting with a re-numbering. Interesting idea, usually a re-boot gives a slight sales spike, but I can see with this title many people (maybe myself included) will use the break as an excuse to quit. It might be better to keep the numbering going and try and keep Vaughan's momentum going.
Either way, it will be interesting to see what happens with this.