With Commentary by Sid

The staggering repercussions of DC Comics' INFINITE CRISIS continue to spread in March, as the heroes of the DCU take a sudden leap "One Year Later."

Spinning out of the incredible ending of INFINITE CRISIS #5 (DEC050244), the "One Year Later" issues introduce a spectacular array of new creative talents and startling new directions across the DCU. Now, DC unveils the complete list of "One Year Later" titles, along with their creative teams!

For those of you not in the know, the above should have filled you in. Every core DC book takes a leap one year forward in March. Much intrigue will follow as we try to piece together what has happened but we won;t be in the dark for long (about a year to be fair), as DC's "52" will shed light on the missing year.
52 is a weekly maxi, maxi-series told in real time. I presume the first issue will debut in April. As far as I know, the price is yet to be determined.

AQUAMAN: SWORD OF ATLANTIS #40 New creative team! New title! Written by Kurt Busiek Art and cover by Butch Guice
My complete lack of interest in Arthur Curry as a character means I won't be picking this up. I have heard very mixed reports on aquaman for the last year, upto and including the sub-Diego storyline (which has had a complete lack of house support in any other DC titles, JLA, Infinite Crisis or anything). Will be interesting to hear the reports on this one.

BIRDS OF PREY #92 New art team! Two new members! Written by Gail Simone Art by Paulo Siqueira & Robin Riggs Cover by Terry Dodson & Rachel Dodson
Not much interest in this series for me, I havn't read it since Ed Benes left.

BLOOD OF THE DEMON #13 New series direction! Written by John Byrne & Will Pfeifer Art by Byrne & Dan Green Cover by Byrne
How is this not cancelled?

CATWOMAN #53 New art team! Written by Will Pfeifer Art by David Lopez & Alvaro Lopez Cover by Adam Hughes
Not really reading this either, sorry. i miss the purple costume and Jim Balent. 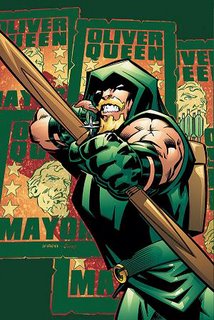 GREEN ARROW #60 New art team! Written by Judd Winick Art and cover by Scott McDaniel & Andy Owens
Scott McDaniel on Green Arrow should be a great thing. His Nightwing work is without par, but his recent Robin work didn't really work for me. Green arrow is a fantastic character when written right, it took Metlzer to remind us this...twice.

JSA #83 New art team! Written by Paul Levitz Art by Rags Morales, Dave Meikis and Luke Ross Cover by George Pérez
Think I will stick with this a bit longer, I started buying it with the ID Crisis crossovers and have just kept buying it. Its been good so far, but the new creative team might put me off.

JSA CLASSIFIED #10 New creative team! Written by Stuart Moore Art and cover by Paul Gulacy & Jimmy Palmiotti
Have to judge this series issue by issue, as with all anthologies.

MANHUNTER #20 New series direction! Written by Marc Andreyko Art by Javier Pina & Fernando Blanco Cover by Jesus Saiz
Can't belive this isn't canned yet. I suppose its good that DC have such commitment to their poorer selling titles, Marvel would have axed this at #12.

NIGHTWING #118 New creative team! Written by Bruce Jones Art by Joe Dodd & Bit Cover by Jock
Damn. Might have to can this title, I don't really like Bruce Jones as a writer, I tend to get bored after about 5 issues, like I did on his Hulk series.

OUTSIDERS #34 New roster of heroes! Written by Judd Winick Art by Matthew Clark & Art Thibert Cover by Daniel Acuña
Should be good, it's a fairly solid title so i shall keep with it for the foreseeable.

ROBIN #148 New creative team! Written by Adam Beechen Art by Karl Kerschl Cover by Ed McGuinness & Dexter Vines
Started to get a bit bored by the Willingham run, which is shocking considering how much I like his Fables work.

SUPERGIRL #7 New writer! Written by Greg Rucka Art and cover by Ian Churchill
I have enjoyed this series far more than I thought I would. it would be nice if it came out a bit more regular. After Infinite Crisis is all said and done this book might seem a little more obsolete, and I'm sure its contents will become more perfunctory.

SUPERGIRL AND THE LEGION OF THE SUPER-HEROES #16 New title! Written by Mark Waid Art and cover by Barry Kitson & Mick Gray
A rose by any other name... Maybe its just me, but I didn't find any of the characters interesting, and for the first time in years i actually stopped getting a Mark Waid title. Still, a 15 year old girl in a miniskirt should boost the sales on this book. 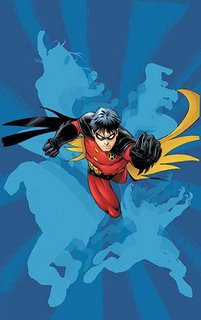 TEEN TITANS #34 New roster of heroes! Written by Geoff Johns Art and cover by Tony Daniel & Sandra Hope Variant cover by Ed Benes
Bastard variant covers! One of the best series DC has put out for years, I will stick with this one as long as Johns is on it. Young Justice was my favourite books for years and this series fills that gulf nicely, it's been really great following the progression of Bart Allen over the years, as he surfaced around the time I started reading comics.

All "One Year Later" titles will be solicited in the January Previews (Volume XVI #1) and are scheduled to arrive in stores in March.
Posted by Sid at 11:12 am

I'm not sure why DC have said this is the complete list of one year later titles when we know there are more to come like Flash and Wonder Woman.

Yeah, I'm sure they meant "complete list of One Year Later titles - which start in March"

How can you say Marvel would axe anything at issue 12! I'm sure Thanos was issue 8 or 9... And Maddox didn't even finish it's first storyarc.

Unless I've had some stuff missed from my Standing Order...

Right, because this blog's been going so long without me being able to read it, I now have 98 sodding Microsoft Word pages to read... Luckily it'll be a slow night at work...

I think Thanos went to 12, and I'm sure Maddox did wrap up too, so it might be worth hitting the back issue section.