More about The Other

The Other Part 8: Marvel Knights Spider-Man #21

The cover says it all, J. Michael Straczynski and Pat Lee. Look at the horrible 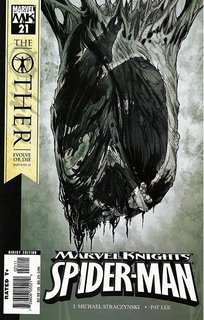 drawing, I think its meant to be a coccoon with Spidey in it, but I couldn't be sure.

The writing on this book is fairly solid, like I've said before I am reluctant to hate JMS for the content of this story-arc for the simple fact it was Hudlin's brain child. Tony Stark confronts MJ with some pretty horrific home truths; they have to desicrate the body in an attempt to hide the cause of death if they wish to protect Spidey's secret ID. Starks description of what needs to be done is grissly, and eventually MJ succumbs to the reality of the situation and comes up with a sensible, practical alternate option to burning her husbands corpse (maybe Stark has been reading ID Crisis and wanted to tap into the burnt corpse dollar).
There is a brilliant scene between MJ and Wolverine, where he seemingly is hitting on her, those of you with the ability to read between the lines and who actually understand the character of Wolverine (he hasn't been written consistently for years), will guess as I did, that he is giving her someone to hate. If you can't figure it out, it is descibed fully on the next page, so its reader friendly too.

The next event of consequence, is finding the hollowed out corpse of PP in the morgue. Quite evidently he has shed his skin as some spiders do, but that probably wouldn't be your first thought upon finding a dead friends hollowed out body and Stark incorrectly assumes that someone else has broken into his tower again. After a breif biology lesson in the nature of spiders, we see what the cover already told us, that Spider-man is in fact not dead, but in a cocoon. Growing, rebuilding, evolving.

Thanks to the inconsistencies in Pat Lee's "Art", Cap, Wolvie, Stark and Jarvis are all about the same height, but the rest of his work is so bland and inoffensive it's pretty hard to comment on (and no, I am not jumping on the "I hate Pat Lee" bandwagon - I started it).

It's certainly better than issue 5 and 7, but at the same time it kind of renders the last few issues obsolete. Spider-man is obviously about as dead as Spock was at the end of Star Trek 2. I know there are a lot of people who are defending this story-arc, but if a movie franchise treated its fans the way this storyline is, it would be a commercial and critical flop that would make Joel Schumacher blush.
The tagline for the series is "Evolve of Die", but it seems in the course of evolving the character, they're killing the readership.
Posted by Sid at 12:40 pm

Wait a goddamn second here,
Unless my GCSE Biology failed me.
This isn't Spider-Man, it's Caterpillar-Man.

i have always hated Pat Lee, the moment I saw dark minds I hated him not many comic artists bring about absolute revulsion in me but pat lee does, his work is bad plain and simple and with time he gets progressivley worse, he is like a new age Rob Liefield and hopefully comic fans will see him in the same light eventually.