Where have we been?

So, while I ponder the future of www.acrossthecounter.co.uk, I leave you with a comic strip of Scott Pilgrim that you probably wouldn't have found otherwise. 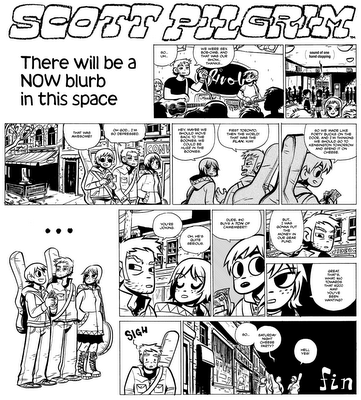 (Click to enlarge obviously, if any one of you leaves a comment saying it was too small to read, then may Matt Fraction turn up at your house and rewrite all the dialogue in your favourite comics in his recently acquired - yet already tired - faux-Ellis style)
Posted by Sid at 12:04 pm

Two months does go quick, nearly done with my first semester of Uni, haven't actually spoken to you in about three months now, each time I'm back I'm generally come in on the Friday to pick stuff up so I keep missing you.

Stoked about the Preacher news, as wary as I am about Mark Stephen Johnson I'll wait till be here more. I mean look at Peter Jacksons stuff before LOTR, or even Sam Raimi's Evil Dead, nothing about them qualified him to direct good Spiderman movies.

Guess I'll see you in about 3 weeks, I'll need to pickup about 5-6 weeks of comics then. That's going to make a good Christmas holiday reading stack.