No Coherent String of thought.

Its so hot today that all the fans are doing is pushing the hot air towards me quicker.
The sky is seaside blue, the masses are looking even less educated than normal today and the media is desperately trying to turn last Thursdays bombings into September 11th 2.
Sometimes i think its a good thing Bill Hicks died before we - as a "society" - got to this point.

The worst thing about the death of Bill Hicks is that he had a very important message to get across, a message that his impersonators and clones have failed to recreate because - and lets face it - its far easier to just do the angry man of comedy routine.

Sin City GN's have been selling stupidly well for us, over 100 copies sold in the last three months, which is fucking impressive for our store when you compare it to 2 Sin City Gn's sold in the first 9 years of business. One of the reasons they never sold well for us was, quite simply, there was no consistent uniformed range. People want to get the set of Sin City, and they want them to look nice on the shelf, it took a movie release for Dark horse to get their reprinting ass into gear.
This makes Sin City almost rival our sales of Transmetropolitan as best selling GN range ever, but consider this: Sin City took over £100 million at the box office and had adverts in and on; Bus Stops, TV, the London Underground, Cinema trailers, movie review shows, magazines and had the names of Quentin Tarrantino and Robert Rodriguez attached.
What advertising has Transmetropolitan had?
Good word of mouth. 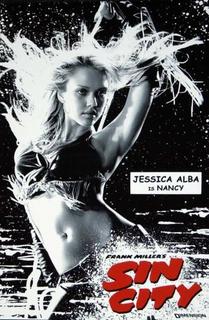 Batman GNs have spiked a little, but they have always sold well anyway, so its just the Bat-curious picking up Year One and Arkham Asylum.
I doubt we will really see any real marked jump in Fantastic Four sales because a) You have to really really like the F4 to get past the campness of it all. b) Most people with a passing curiosity of F4 picked up the Ultimate series in periodical or Tpb. c) The movie looks dull and d) Our local two-screen cinema won't be getting F4, as it will be too busy showing Madagascar Pixar-clone and Willy Wonka's Chocolate-Rehash. So I am sure the 300 Free Comic Book Day comics we gave the cinema featuring the F4 are going to go down a treat when they are given away with NOTHING!!! (Our local cinema didn't get sin City either)

So why are our best selling GN ranges Transmet, Sin City, Barry Ween, Powers, the Ultimate range and Preacher?
Maybe, just maybe its because these are examples of comic lines being released SEQUENTIALLY as GNs. Meaning, in order and numbered.
The last 5 years have seen leaps and bounds of progress in the Tpb / GN arena, but there is still a long way to go.

Titles like Robin for example, which is a fairly decent seller. The Tpb range includes Tim Drakes origin, issues 1-7, and then jumps all the way to issue #123 with the Bill Willingham / Spoiler isues.
JLA, which was DC's flagship book for a long time (before Supes / Bats - which incidently screws over tpbs in favour of overpriced Hardcovers) only had numbering when it reached volume 8, (when I say numbered, I mean on the spine, its a bit useless if it only describes where it fits into an arc when you crack the title open only to find out you have missed three volumes) something which they have since rectified in subsequent print runs. The same thing applies to the first 5 volumes of Nightwing.
The list continues: Green Lantern; no numbering. Hellblazer; Volume 1 numbered, the following volumes nothing. Flash - another flagship DC title; no numbering.
I can understand it with Batman and Supes as the sheer volume of titles makes it impossible for it all to reach Tpb with any kind of consistency or quality control, better to keep to the core stories.

Marvel are hardly innocent either, pretty much every volume of the non-Max Punisher series by Ennis is out of print, the first two volumes of Mark Waids Fantastic Four have dissapeared, Morrisons New X-Men, Davids Captain Marvel

The people leading the way with numbering is Image / Top Cow, they have always made it very clear which volume of the title you are buying. Even Midnight Nation is marked as Volume 1, even though I think it will NEVER have a sequal.
But they are not perfect, there is a lot of money to be made (from idiots) who would buy a sequentially numbered, complete GN run of Spawn. Rather than the currently available volume 7 and 9, and two Spawn: Angela GN's.

Before the industry can make the inevitable leap from monthlies to OGN, this kind of lacklustre numbering and reprinting schedule needs to be addressed by all companys.
Posted by Sid at 12:17 pm