A Letter to Mr. Larsen.

First off, let me say, I have never been a follower of your work. (It gets better from here on, honest). 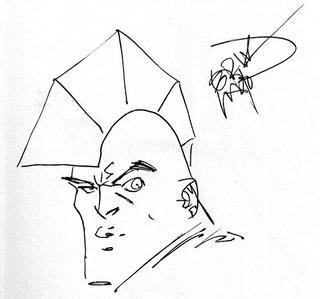 I got into comics around 1995, about the time most people were getting out of them, I liked the Clone Saga, still do. Since then I have been somewhat of a Marvel / DC fanboy until about 3 years ago, when I started branching out to find anything new that could interest me.
I always kind of considered Image to be somewhat lacking. I have never liked Spawn, Shadowhawk or any of the Top Cow books (JMS excluded).
It shames me to say that I had written Erik larsen the comic creator off as, "one of those Image guys". -How wrong I was.
However, I recently started buying more Image, (Invincible, Walking Dead, Girls, Flight) and was very impressed by the diversity of the product. I noticed that it was yourself who was behind a lot of the drive and diversity in the "New" image.
So when I saw that you were doing a weekly column on CBR, one of my favourite websites, I made it a point of reading it every week. I got a lot of friends to read it as well, people who had also previously ignored both yourself and Images work.
What a great column. Every one has been good, until about two weeks ago.
Thats when we got the great column.
READ IT HERE

I agree with most of the things you said in the column. I hear that PAD took major offense, some people will. Things that are worth saying are often the things that people don't want to hear.
So with a lot of people up in arms about the truth, with everyone on tender hooks waiting to hear your reply to Peter Davids response, what do you do? You have captured the industrys attention, knowing that EVERYONE will be checking out your next column, what do you do?
You run a column about how important your Grandpa is to you..
...thats so cool.
READ IT HERE
Good work Erik.

I was wrong it seems, about both Image and Erik Larsen.
-Sid Beckett
Posted by Sid at 2:27 pm

Erik Larsen sure is cool. I'm one of the people who didn't take much notice of the guy and assumed he was like everyone else at the old Image. I have been proved wrong and look forward to reading his column on CBR each week.

Jesus Christ, A guy makes a valid comment that 90% of the comics on the market are essentially pointless, good on him! I buy way too much shite every month to disagree with the man. The industry turns around & treats him like a fucking leper, for daring to suggest that creative people should be creative, i have a new found respect for Mr Larsen, still think savage dragon is a piece of shit, but as the man says it's his piece of shit & nobody can take that away from him. Look forward to his next columns, hope he develops even bigger balls & starts calling out the idiots ruining the industry by name.

Peter David has always had a grudge against Erik Larsen, well that's the way I see it, I dont know the full history between these two but it seems David was of a couple who took offense and i think that may be mainly due to who Erik is rather than what he wrote. You want to see a piece of history between these two? Dig up issue 20 of Savage Dragon and look to the last letter in the letters page. I've got a copy to scan if anyone every wants to read it.

If you scan it and e-mail it to me, I will post it on the site!

Sure, Ill scan it and send it off when I get back home, so it'll be finding it's way to your mail box this sunday. Send it to the comic connections email address?

Erik Larsen's articles are great, jsut at the minute I can imagine him simply preaching to the converted. Give him a chance to reeeeaaally start pissing off some high ups and hopefully the change will start.