Are comics too cheap?

This is a serious debate which has been raised by some comic stores in the US, who think comic companies are underselling their stock. Two of the items in questioning are Warren Ellis' "Fell" and the forthcoming Stephen King "Dark Tower" collaboration. 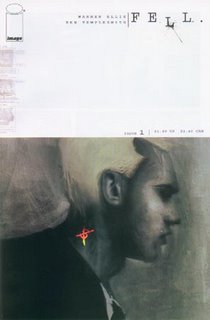 for "Fell" is that at 2 bucks a piece, the retailer doesn't make enough money to warrant paying the staff to put the comics on the shelf. What a load of fucking bollocks. I bet his store is packed come Free Comic Book Day (May 6th, 2006). Surely he pays his staff by the hour, and not by the unit of comics loaded onto the shelf. I think this is just about the biggest bunch of arse I have ever heard (at least since Marvel announced a 1602 sequel without Neil Gaiman).
I am all for this format and I am intrigued to see more people experimenting with the form, although to be fair, indie publishers and creators have been playing with form for years, kudos to Ellis for breaching the mainstream with a new format.

The other argument is with the forthcoming Stephen king project. Some retailers are complaining that $3 an issue is too cheap, and want to see the book raised to $4 (about £3) so they can make a quick sensationalist buck off the backs of hordes of Dark Tower followers who want to read the missing chapters (the comics contain all new work, not just adaptations of already released books).
How fucking short-sighted can you get? Comic shops have a lot to learn from other places, namely businesses, because comic shops don't have a clue how to run a business themselves, relying instead on quick buck turnarounds and a loyal readership, rather than trying to expand the pre-existing readership. This is a comic event that could feasibly bring in thousands of intelligent people (who already read) into the world of comics, from there we can get them on to others: Sandman, Promethea, 30 Days of Night, Invisibles, Preacher, Planetary, Transmet and hundreds more.
Or...we could fleece them for every penny/cent we can, and make them think "Shit, I just spent $24 on six comics which will take me an hour to read, I could have bought at least two novels and a cappuccino which would have lasted me a hell of a lot longer." I would have been much more interested in this project if Marvel released it as an OGN (original graphic novel) with a $15-20 price tag including back up materials (scripts, King interview etc..) available from your local bookstore (as well as comic stores), because it looks like a hell of a lot more of a purchase than six comics in a plain carrier bag, sold by a retailer who is more interested in the cancellation of "Enterprise" or Formula One than the comics you want to buy.

It's been much lamented over the last ten years that a change is coming and in order to survive changing customer demands the industry will have to evolve, but there comes a time where talking about it will not suffice. It seems more and more evident to me that the majority of retailers want nothing more than to keep comic reading a private, insular, self-perpetuating industry, where outsiders are shunned and elitist attitudes rule the roost ("I liked Superman before the film came out and I don't like his new logo" etc...).

At the Brighton Comicon I had the pleasure of meeting a few like-minded retailers, and it's made me realise that the future for the comic industry isn't as bleak as I'd previously thought. All we need is the old guard to die - and die they will - and the new guard of comic retailers will be there to take over. People like Stephen Holland at Page 45, Jamie at Comix-Shop, Jeff at Bedford (sorry mate, forgotten the name of your shop), all of whom are poised to continue retailing the comics that matter to the public. Talking to them all is great fun, as they always have a positive comic story, a title to recommend, a point of sale tactic and general love for the industry. Whereas the best the old guard can talk about is the level of sales during the Pokemon craze and the queues outside their shop for the Death of Superman farce (true fact, most US comic retailers fondest memory in 30 years of business include those two facts - Diamond Sales E-Mails).

At the tail end of 2005, the comic industry is an odd one to look at. On the whole, its been a healthy year for comics: good reviews in main stream press; the continued excellence of comic book films; more genre diversity; increased book store presence and Tpb sales; the slow rise of indie press attention; more mainstream writers flocking to the industry (Orson Scott Card, Stephen King, Allan Heinberg etc...), but there are still a few negative aspects: the insular nature of the industry; the continual whoring of the industry (merchandise for everything - a Hellboy Ouija board for Christ's sake!); compulsory company wide crossovers and of course the steady decline of sales across the board.
On the whole though, I would have to say the good far outweighs the bad, and 2006 is shaping up to be another interesting year.

-Sid Beckett: Would like to add that any spelling errors are due to a shit spellcheck bought to you by www.blogger.com
Posted by Sid at 4:17 pm

Was that a couple of digs aimed at Glyn I found there or am I reading far too much into that?

On another note, is it just me or are the recommendations Glyn gives out, ones that you've told him in the first place?

Can't say I like the dark tower much myself,(didn't sell me on the first book and the beginning of the second was to pedestrian to pull me far enough in to get me to carry on reading. If I read anything by king it's going to have to be classic horror, IT and The Stand should be read by all), but I do have friends who eat that stuff for breakfast, who I will be putting your way.

You know if Marvel is going to ship out wider than Comic Book Shops with it to reach the already established readership in their cosy Waterstones or Ottakers? Or are they going to use this as an event to pull readership into their LCS?

i haven't read the post yet, i will do in a minute when my eyes start to cooperate ~ but i read the title - and so far, my answer is no. :)

I have not read King since "It" and the Bachman books, which were great to be fair. He is scraping the barrel

Marvel will treat the release of this book like they do everything else, lots of adverts in comic places, not one in Time magazine or a book magazine, because they don;t get how to reach a target audience, they think thats up to the retailer.

And you other point Ryan, and least Glyn reads comics again, there was a four year gap where he just stopped altogether.