Panini has cancelled their edition of Ultimate Fantastic Four comic.

The last issue is #10. Panini's Ultimate Fantastic Four #11 and #12 have been cancelled.
I suppose the main reason for the cancellation is poor sales (being a UK reprint book and all), but by the time issue #12 was due to ship they were going to be getting dangerously close to overtaking the American series and that probably factored in to the decision. This is what happened with the Transformers UK comic in the '80s hence the need for original strips by the best of British. It would have been interesting as all hell if they'd commissioned some new stories for this series, but it's the 21st century and the UK is ruled by the Chavs.
Another blow for the

In the last post I covered all things relevant to the "one Year Later" arc, some notable omissions and points of interest include:

BLUE BEETLE by Cully Hammer - Awesome artist. Probably not Ted Kord. This is one that I can see selling really well (on the back of Infinite Crisis and the death of Ted Kord), and then people getting bored with and sales going down the toilet quick as a flash. Look at the shiny artwork and re-design.

SUPERGIRL AND THE LEGION OF THE SUPER-HEROES #16 - How this is going to fit into One Year Later is anyones guess, I thought it's supposed to be set in the future.

GREEN LANTERN: NO FEAR HC - £17 retail price. For 6 issues?!? I thought the point of collections was to make them cheaper? ID Crisis HC is £17 too, but thats 7 issues, all oversized, and it was a mega-eventful story. The Tim Sale Catwoman series was only £13 in HC, and that was a deluxe format mini, not a run of the mill ongoing. Tut tut DC.

SUPERMAN/BATMAN #25 - The last issue written by Jeph Loeb. I seem to remember Jeph's son worked on this issue before his untimely death. Unfortunately, this book is now running so late that it is the only core DC book not joining into the One Year Later festivities. In the grand scheme of things compared to the death of a son; no, it's not really important, but DC should have pushed for this to have a February release, to tidy up the One Year Later event.

ULT. IRON MAN TPB - Out of all of the Marvel solicits for March, the thing that stuck in my mind the most was the Ult. Iron Man HC collection. Not only is it a lot more sensibly priced than the DC HC's of late, like ID Crisis, it has two covers. Yup, in true Marvel style, any good idea DC has Marvel will "borrow". In March, look out for Ult. Iron Man Direct Market edition (fanboys) and the bookstore version (conservative types). Personally, as with ID Crisis, I think this is a great idea, and I too am tempted to buy the bookstore version, because its a lot easier to get a non-comic reader to pick up a book with a simple, informative design, than some fannish insular picture of a character who might not be instantly familiar to the layman.

ALIAS OMNIBUS: If you don't already own Alias (nothing to do with the poorly written TV series featuring the woman with Affleck's chin), then this is your perfect opportunity to do so. Written by Bendis! with art by Michael Gaydos, this precursor to "The Pulse" goes where no other Marvel book dared to go. fuck. Fuck. FUCK!!!

ULTIMATE X-MEN ULTIMATE COLLECTION BOOK 1 TPB - How is this different to the Ultimate X-Men vol.1 HC?

SPIDER-GIRL PRESENTS JUGGERNAUT JR. VOL. 1: SECRETS & LIES DIGEST - The singles issues of this sold like 7 copies of each issue, but it was a whole lot of fun, recomended for '80's Marvelites. Pure fun.

INCREDIBLE HULK: PLANET HULK PRELUDE TPB - How do you kill a Summer crossover before it even begins? Start the prelude a month after House of M finishs. At least with DC Identity Crisis and Infinite Crisis were actually related to each other. 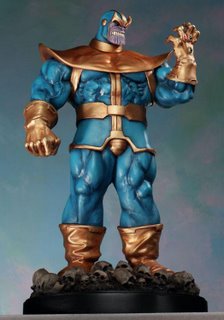 - Having said what that about Planet Hulk, its looking like Thanos is going to be a massive part of this Annihilation crossover, this can only be a good thing for me as I am a big fan of Thanos when he is written properly as an evil, sadistic shit.

X-MEN: MUTANT GENESIS - The Jim Lee stuff in the early '90's was absolutely fantastic and sold 8 million copies and laid the foundation for the forming of Image. This is a must read, X-Men at its absolute best (except the Whedon stuff).

More about adverts at Larsen

The oft-intelligent Erik Larsen has more to say on the subject of advertising:
http://www.comicbookresources.com/columns/?column=20

Heard lot's of good things about this book, but I can't seem to find it for sale anywhere. Shit, I cannot even find a picture of it. anyone with any information or ordering codes, please let me know.

That's the lot for now. Have a good Christmas and thanks for reading.
Posted by Sid at 1:33 pm

Well heres the link to where you can buy Pyongyang

Don't know if this is good enough, what with you looking for order codes and all.

i dont know why but if you say PYONGYANG loads of times really fast it sounds really funny!

It's too early for that many Pyongyangs. Anyone know what the word means yet? I could Babel fish it, but I'm too darn lazy. Thanks for the link Ryan, as you can see I exhausted every lead I had before whinging that I couldn't find it, of course, if Diamond had it, I would get it a bit cheaper but, oh well.