What's going on with the world? I ask you?

So the DC and Image solicitations for the month of April have gone up, other than titles which I get each and every month (Invincible, Supes, Bats etc...) Image have a lot more to interest me than DC. That's not right. Here is a list of things that caught my eye. 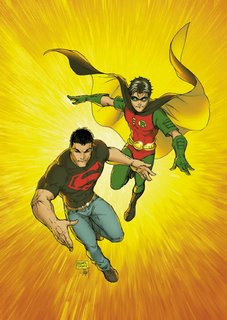 This issue was partially written by Jeph Loebs son, Sam, before his untimely death last year, with assists from some of the biggest names in the comic book industry. Its also the last issue of Jephs run, as next issue is taken over by Mark Verheiden (Superman, Smallville). The story revolves around Superboy and Robin during Infinite Crisis, which is awesome as they are two of the first DC characters I started reading all those years ago.

CHECKMATE #1 - To be fair, if this wasn't set in the DCU I would be quite looking forward to it, as I'm sure anyone who ahs read Queen and Country would know, this is the type of book Rucka can write in his sleep and it still be better than most comics. However, a DCU S.H.I.E.L.D. does nothing for me, I will cheak out the first issue.

CRISIS AFTERMATH: THE BATTLE FOR BLUDHAVEN #1-2 - Where did this come from? I hadn't even heard rumblings about this. Sticking "Crisis Aftermath" as a title prefix translatyes to "shit book, how can we increase sales. i will check it out, but I don't expect much from it. 6 issue mini.

ION #1 - The third GL related monthly title. Is it needed? Kyle Raynor is easily my favourite GL, but redesigning his costume and sending him off into space (again) doesn't endear me to this new storyline. Oh, and he might go evil and stuff. Sounds dubious.

SEVEN SOLDIERS #1 - Last issue?!? It seems like only two minutes since issue #0 shipped. Time to start reading the Tpbs methinkgs. I find Morrison hit and miss, but I have only heard good things about this.

FRANK CHO WOMEN: SELECTED DRAWINGS AND ILLUSTRATIONS HC - Yes! it may only be black and white, but any Frank Cho artwork is worth checking out, I recommend "Liberty Meadows" to one and all. Buy it for your girlfriend, read it together, drool over Brandy by yourself.

JESUS vs. VAMPIRES ONE-SHOT - Oh my god! Fanastic. If you remember the crossover hysteria from about five years ago (Superman / Terminator, Batman / Aliens, Aliens / Predator / Witchblade / Darkness etc...) you might find this concept as funny as I do. I was always looking forward to jesus Vs. tarzan myself, but this will do. Hopefully, this book won't take itself too seriously and will be the first of a long line. 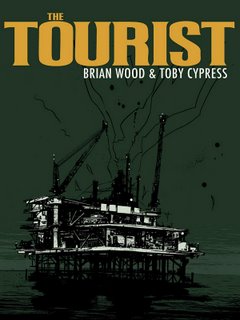 HELLSPAWN: THE ASHLEY WOOD COLLECTION TP - Or more importantly, Brian Michael Bendis writes the first half of the Ashley Wood collection. Ash Wood has a huge following these days on books like PopBot which have caught the eye of the artsy-fartsy Andy Warhol scene, but back in the day he used to draw Ghost Rider 2099 - go figure. In a reverse move, Bendis went from image to Marvel, reputadely when Todd didn't pay him for some Sam and Twitch and Hellspawn issues. This book completes my Bendis collection, 'cause I am a sad shit.

But it looks like Vertigo rool the roost this month, 6 top tier titles titilate my taste buds. 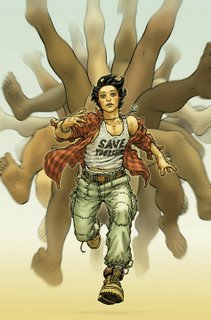 I talked about issue #1 last month. After reading a preview, I am quite looking forward to this. If you havn't read the excellent "It's a Bird" do so, its fucking amazing and also written by Steven T Seagle. Art by Demos Becky Cloonan, see how it all connects together?

DMZ #6 - Written by Demo's Brian Wood, I know I whore for his work but there you go. Confession time, I havn't read any of DMZ yet as I am waiting for the first 6, if its half as good as his recent "Local" series it'll be excellent. also, have I mentioned Channel Zero yet today?

FABLES #48 - The best monthly comic you don't read. And I know you don't read it monthly as we only sell 1 copy a month - to me. It goes very well in Tpb though. Much lamented so I will move along.

HELLBLAZER #219 - The conclusion of the first arc by new writer Denise Mina, can't wait to sit down and read all four issues. Issue #216 shipping Thursday, marks the begining of her run. No more Mike Carey! Woo-hoo.

TESTAMENT #5 - With art from MamTors Liam Sharp, check out Event Horizon and all things MamTor at www.mamtor.com.

Y: THE LAST MAN #44 - The saga of Yorick continues, another Vertigo book that sells better as Tpb than singles. Volume 7 of the tpb ships this month too, which will probably interest most more than #44.

last, but not least, the monthly offerings from

EX MACHINE SPECIAL - Written by the excellent Brian K Vaughan whom you whould all know about my now from Runaways, y the Last Man and bsaically, me going on and on about his work. Any of you with a more than fleeting interest in American politics or "The West Wing" will do well to check this book out.

THE AMERICAN WAY #3 - I just read the preview of issue #1, imagine a dick and fart joke without toilet humour. Empty and soulless. Exopected so much more from the writer of "Authority - Human on the Inside".

THE AUTHORITY: THE MAGNIFICENT KEVIN TP - 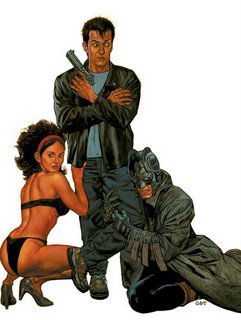 
Marvel solicits will be released before the end of the week, I'm off to do the shop orders for March, I guess I got a little ahead of myself talking about April.
Posted by Sid at 11:51 am