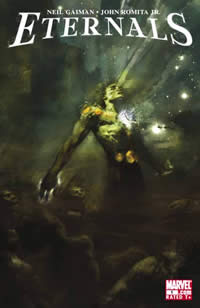 So, what do you people think of Variant Covers?

Personally, I have no problem with them. If a variant cover is a nice image and it's of Spider-man or Transformers, then 9/10 times I'll be a sucker and go for it.

Professionally? I fucking hate them. I can see they are an underhanded sales trick with nothing more in mind than inflating sales, and I am quite happy to make my money with them. But they are a real headache. Espceially as Marvel don't list them during the initial ordering phase.

Case in point: Neil Gaimans revisioning of "The Eternals".

Neil Gaiman can sell a book, DC know this, Marvel know this, we know this. This book was always going to sell in good numbers, but more improtantly for Neil's work, this will have a long, healthy book-shelf lifespan with mass-market appeal. The comic will pay for itself, the Tpb however, will be a nice cash-cow for Marvel.

I was initially going to order about 15 copies of this title, as I thought a lot of people (myself included) will wait for the Tpb. So I went with 15.
Then a few weeks later I got a Marvel mailer, and it said "John Romita Jr Variant cover for the Eternals. 1:20". Meaning in order to receive 1 variant I have to order 20 regular. What the hell, its only 5 more than I was going to get, and one of our customers is a MAJOR JRJR fan so it was a guaranteed sale.
Then a week or so later, they anounce that a "super limited John romita Jr Variant Cover Sketch Edition, 1:50". Quite a leap, but the JRJR fan will most likely want it so it keeps a regular happy, and this way we can order another of the 1:20 covers anyway, so what the heck.

Weeks pass, then the order comes through. We have about 30 copies sat on the shelf not doing much, except gathering dust and making it look like I don't know what I'm doing. I've always wondered if customers see a lot of copies of a book, do they wonder "Ah, the retailer has faith in this book. This must be a good book." or do they say "Ah. A turkey, this book must be a turkey. It's just sat there not being bought."
In truth, the customer is probably happy shoping for the things they know they want, and are quite happy to ignore quantity.

So the book sells fairly well, the regular JRJR fan buys the variant covers, we put one on the wall at a reasonable rate all is good.
And then we notice there is a third variant (or a fourth cover), which I had better get for the regular. Even though the cover isn't by JRJR it's become a completist thing now, so I contact the old distributors hoping to order at least one copy.
Andy at Diamond: "Ah, the Coipel Variant. Limited to only 10 per account".
Now remember, I only want one...
..but only ten per account! I must be able to sell all them and make a profit, surely. I place the order, it seems silly not to take full advantage, after all, it's an incentive, right?

Want an idea? If you want to shift stock quicker, make bags of single issues, say Civil War #1-7, and sell it for the same price or just under what the TPB goes for. That would get a few more out the door. I'd certainly consider them. ;)

Already do, with the sets. Infinite Crisis #1-7 and the Secret Files for £20, a saving of £2.50 on cover price on comics which most shops sell at well above cover price.
I did it with House of M to clear surplus stock too, worked a treat too as we were selling the sets for £3 less than the tpb. Only problem, I'm stuck with three House of M tpbs that no-one wants because they all have the singles. Doh!
But yeah, good idea anyway.

Cool! I noticed you did it for JLA/Avengers. However, although it's priced under the Absolute, it's still out of my price range!

BTW you need to reduce that poster, as it just made the contents thing shoot to the bottom.

Wait, you have another one of the JRJR varients? The 1:20 one? Can I have it...? I don't actually think I've ever told you how much I love Romita Jr. He's the reason I read Amazing Spider-man originally (stayed because of J.M.S.), then started on Wolverine because JRJR was starting on that. Whole reason I'm getting Eternals is because of Romita Jr...

I've told about 5 people I know online that I'm a Romita Jr fanboy. He's one of the great artists whom you can identify just from seeing his shading work or eye shapes. Though I won't claim you can't do this with any other artist, because even I can identify McGuiness' or Sean Chen's work...

I dunno where I'm going with this, anymore...

Hmm, I tried the site on three different computers and the formatting for the site and the poster seemed to be okay, it might be your screen resolution???

And Andy, I will pull the JRJR cover for you.

Thye only variant covers that annoy me are TPB variants.

Yeah, TPB variants for the sake of it suck ass (like the Army of darkness tpb's), and when its just a choice of two different cover artists it's balls.
But when it's a choice between a Michael Turner cover for comic stores and a "Brad Meltzer: Identity Crisis" bookstore edition, I actually think that's really cool. Simply because if I lend the bookstore edition to a non-comic reading friend, they are more likely to read it, because like it or not, we all judge book's by their covers.

I will pick up any variant cover that has Superman on or has a link to the man of steel. My Superman collection is totally flawless from 1986 to present, I have all 2nd prints, RRP's, foil covers, etc, etc.

I don't have a major problem with variant covers. Sometimes I would like the price to be a little less when it comes to something like an RRP but at the same time that would make them less special so I will pay the extra bucks to get them.

You just have to be selective with what you buy. There is nothing that annoys me more with comic collectors than when they complain about having to buy a 2nd print or variant cover. You really don't have to buy them, just get one copy with your favourite cover.

Still a pig to order though.

I can imagine but your bloody good at it, I know with you on the case I don't have to worry about missing any.