More Bombs in London: Copycat attacks done on the cheap my people who didn't know what they were doing and thought they could learn to be a terrorist over the internet in two weeks? In fact, I am pretty sure over the internet you could buy a certificate confirming your terrorist stature.

People who Can't Break the Cycle: These people fuck me off. These people usually have a real, deep-routed psychological problem with their parents and/or upbringing, and claim the last thing they want to do is become their parents. Yet they seem completely powerless to break the cycle as they continue on the downward spiral to destruction.
Case in point: One of my former best mates who shall remain nameless (but we will refer to as Asshole) went around some of my other friends house last night, in the middle is an ex-girlfriend of Asshole who is now going out with the aforementioned Other friend (I fucking hate this inbred hick shit, I hate it on EastEnders and I hate it in reality). Asshole decides, as he is as drunk as the Grandfather he claims to hate, to start causing shit on the property which leads to Other Friend having to call the police out.
Its fucking clownshoes, Asshole cannot overcome the demons of his past and actually have a life so he has problems with anyone who can, despite the fact he split up with this girl nearly two years ago.
I hate him. And you for reading this bile.

Racists: There is a great wrestler called Mohammed Hassan. He is great, and he has a very good angle where he talks about the discrimination that American Muslims have suffered since September 11, from the perspective of being an American-born Muslim himself. This usually ends with a fucking idiot crowd chanting USA at him, as if it was going to upset him - when it is his home country - because the average fucking IQ of the average wrestling fan is so low, that is the only way they can percieve a Muslim; Not One of Us.
I got this in an e-mail this morning:
"Looks like The Great American Bash will be the last time we see Hassan. UPN and its sponsors are outraged by the fact there is an arab on TV due to the terroist attacks they have told WWE they won't allow him on TV. WWE have bowed to the pressure and agreed to remove him after Sunday."
Thats basically saying that he cannot wrestle - which is the man's job for fucks sake - because of his ethnic origins. Equality in the works people. Orwell was right, society has failed. The experiment is over. Wipe the petri-dish clean and start again god.

I suppose as this is a comics blog I need to put something comic related in, here we go: 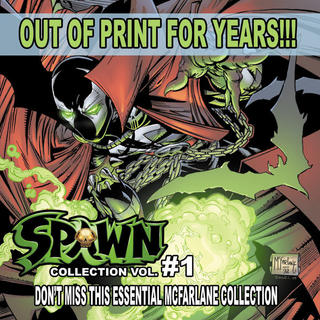 In the first move that could be considered clever from Todd McFarlane Productions since they didn't pay Bendis and he moved to Marvel (oh wait, that was a fucking dumb move!), they have finally announced a reprint Tpb series of the Spawn comic run in sequential order. Now while I hate Spawn, a lot of people love it, and these will sell, and probably help the future success of the Spawn comic franchise.
Good work Image.
Posted by Sid at 12:27 pm

Regarding Hassan, I have just read WWE plan to send him down to OVW so Paul Heyman (now in charge of the creative end of OVW) can repackage him and Hassan (or Mark Magnus as he will probably be known considering it was his gimmick before being bought up to WWE can keep wrestling and not get rusty. At least the guy looks to be keeping his job.

my arms are Itchy!

The Hassan thing is fucking terrible. It better not go unnoticed.