Sometimes Ihate my peers in the comic retail industry. I had a lovely email this morning that read:

"I don't know what Warren Ellis did to my local retailer as a child but he refuses to stock any of his books.

"Best not to ask really, I was wondering if you had a copy of the second Global Frequency trade paperback."

Naturally I reply with the usual about how we are only to happy to help, that we stock all the Ellis backlist (including his Avatar and AiT/PLANETLAR stuff), and try and pimp a copy of Channel Zero while I am at it. I then ask which comic shop is prepared to alienate a pre-existing customer and a healthy sector of the comic industry (IE: Intelligent comic readers)... 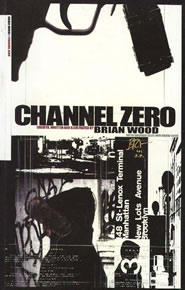 "My local retailer is a nameless little shop in the mean back streets of Rhyl. It's a particularly ugly area of an unnecessarily ugly town with the unmistakable odour of faded dreams and warm desperation. Or that could be all the seagull dung."

And thats why I love this industry. Educated people that can see comics as what they really are, and are prepared to hunt out the really good stuff, even in the face of disparaging bigots.

The thing that really sucks about the industry:
Bad enough that comics are considered a niche market, but "true comic" fans are so quick to attack fellow comic readers if they step outside the very insular boundaries of what they think is acceptable.
If you read comics I am sure you have at some point encountered someone who says: "What do you read comics for? They are for kids?!?" in that strange, somewhat incredulous tone which sits somewhere between inquisitorial and accusational, but wihout commiting to one nore the other (because these people are weak and should die, for they cannot make this one, admitably very small decision on their own without TV to guide them). But you expect this from idiots.
So to then have comic fans ask: "What are reading that comic for?", which basically translates to "I don't read it, therefore it must be crap", in an environment which is suppose to cater to your hobby (a comic shop), really adds insult to injury.

Its just another cause of the abused becoming the abusers. A little taste of power in an otherwise stunted life.

Yeah, we are all guilty to some degree, I, for example, refuse to stop buying X-Men and Uncanny because I have unbroken runs dating back to 1976, even though I havn't enjoyed X-Men for 5 years except Grant Morrions "New X-Men" and Joss Whedons "Astonishing X-Men".
But I will read Maus.
And Bone.
And Soulwind.
And Ronin.
And Nightwing.
And Owly.
And Sharknife.
And Battle Royale.
And Spider-girl.
And more...

Partly because I consider it part of my job, but mainly because I love the industry. I will read something on a recomendation, or a whim, not just because I have been reading it for 20 years and don't know otherwise.
And thats the difference between me and a "nameless little shop in the mean back streets of Rhyl".
Posted by Sid at 9:53 am

It really is shocking how some comic "fans" perceive what other people read.

I will be the first to admit that my comic order is pretty much all superhero stuff but that doesn't mean I don't recognise there is more to the industry than just that. If something is recommended or leant to me I will make damn sure I read it no matter genre. I'm sure some people would think it quite odd that someone who loves superhero DC books the way I do thinks that Strangers in Paradise is excellent. Those people are idiots.

I will read anything I'm given. I'm not saying I will like everything that I'm recommended but I will sure as hell give something a try. My money will always go on my DC stuff but I sure as hell know all I have to do is ask and I will be given something a little different to borrow just so I can broaden my horizons.

Some fans need to learn that there is more out there than just capes and super power related comics. Go mad, take a look at those indie stands and ask for recommendations, I'm sure you will like what you see.

Matt Boyce! said...
This comment has been removed by a blog administrator.
5:24 pm

I think this is a problem that not only effects comics but life in general, most people have narrow minded tastes most people wont take a chance with something different (book/music/film) just in case they dont like it most people dont like to think or be challenged they are happy to go home watch big brother and listen to there 'dido'cd.

Familiar-ness (forgive my bad grammer and spelling) is comfortable and cozy, if you are comfortable why change it.

this is the same for most comics. am i making any sense here? nope fuck it, i think i went off subject.

anyway i implore everyone to read 'persepolis' by Marjane Strappi its a comic about the Islamic revolution in Iran, and proof that you can use the often criticised media that is sequentail art for something other than superheroes!