A Cacophony of Dirge

So, not done one of these for a while; a random blog. Kind of a "What's New with Sid" blog.

Don't expect too many updates this week, I actually have stuff to do at work for once (shock-horror). You see, I have not sorted our comic back-stock for about 4 years and it's got to the point that if I don't do it now I never will. 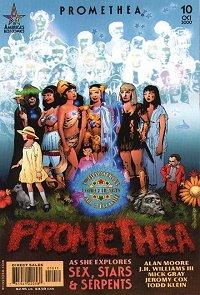 I have just started reading my Promethea Hardcovers, I am glad I didn't read the series when it first came out circa 1999, I so wouldn't have understood it on the level I do now. It is heavy going and certainly not for everyone.
I think Morrison and Ellis fans would get a kick out of it, obviously Alan Moore fans will, as he penned the series. The art is by the ever so talented J H Williams III who some of you may be familiar with through his work on the recent Desolation Jones series (another book I will get in trade as well as singles).
Promethea is an interesting use of fiction about fiction, Alan Moore has constructed a truly rich and thoroughly intriguing historical tapestry for the protagonist and the reader to navigate through, all the while examaning the core philosphy behind existence. Like I said, it can be heavy going, but it is certainly one of the best books I have read this year.
The story can be both lighthearted and deadly serious, following Sophie Bangs journey as she slowly unravels the mystery of magic and Promethea, with comic relief from her best friend (her name escapes me and I can't be assed to google it). We also have the misadventures of F4 parody "Five Swell Guys" (one of whom is a female named Roger) and social commentary in the form of a very Transmet-esque news service, constantly updating the reader of the mental state of the local mayor, and his 42 multiple personalities.
The artwork is dense with lots going on in the background, such as adverts and posters for pop-icon "Weeping Gorilla", and its never afraid to experiment while both form and style.
Promethea ran for 32 issues (even the issue numbering has relevance to the final story) and is currently available in all good comic stores as five Tpb volumes, the fifth of which is due for release very soon. Each retails for about £10 each, except in bookstores where they can run up to £13 each.
Seriously, the now deleted Hardcovers sold for £17 each in comic stores, or £25 each in Borders and Ottakers! It pays to support your local store.

God I love this movie, between this and Sin City, comic fan's really had it good at the cinema this year. In fact the only person who had it better was cult legend Rutger Hauer - surprising everybody by appearing in both. If you've not seen Batman begins or Sin City yet - then what are you waiting for?

Coming soon, honest. I am kind of waiting 'till closer to Christmas as that is what this newsletter will cover. Expect it Mid-November.

I have turned into a complete DVD whore lately. I finally relented and imported South Park series 5 and 6 as it looks like they are never going to be released in the UK, my god - these are two of the funniest series I have ever seen.
Simpsons Series 6 is another one I am working my way through, as well as the first two series of Ren and Stimpy.
The best DVD you can buy at the minute is undoubtably the abjective-less Firefly

series by Joss Whedon, its avilable in HMV for about £18, if its sold out there, then go to:
http://www.play.com
Which segways nicely into my next thread.

SEE THIS MOVIE. It's fairly awesome, and by fairly I mean a lot. People have compared this to the original Star Wars, which is a nice gesture but one which I think ultimately does more harm than good. While Star Wars created an entire scene, Serenity reminds us what it was about good 'ol fashioned Sci-fi action adventures that we used to love: characters!
Lets face it, Episode 1 - 3 had no Han Solo, and that's what they were missing. Don't blame Lucas, don't blame CGI, don't blame Jar-Jar, it just didn't have Han, that was all.
And while Firefly / Serenity doesn't have Han Solo, it does have extremely well realised, realistic characters.

This week I have been mostly playing Bubble Bobble and Rainbow Islands. After 19 years I finally completed Bubble Bobble and Super Bubble Bobble, strangely enough it took the assist of my girlfriend whom has never played the game before and turned out to be remarkable good at it. Go figure.
Rainbow Islands is still a complete bastard. I finally got past the level seven boss but because I had all seven rainbow diamonds it unlocked levels 8 through 10 (stages 29-40), all of which are rock hard and you cannot use continues on them. christ, I am starting to sound like I am on Andi's blog.

The Other is turning into a surprisingly dull story. My interest in all things X has pretty much atrophied, Astonishing X-Men is

the only glimmer of hope. the Ultimate Universe chugs along quite nicely, especially the Ultimates, can't wait for the animated movie of that. New Avengers is still quite a good book, but the three issue in four weeks really hurt our sales for it. Superman is surprisingly healthy at the minute, I think its because of all the infinite Crisis malarky, it is really raising the bar at DC, not long till All Star Supes. Lots of DC variants at the minute, but I suppose you don't have to buy them. The Batman books are tragically juxtaposed right now; stuff like Batman is great, but Detective sucks, and that thing about Leslie Thompkins killing Spoiler made no sense at all. Comics comics comics rragh! I read too many.

With regards the Batman Begins movie got to say it was an enormous let down, yeah the first hour was possibly one of the greatest things I've seen this year a really intelligent & brave treatment of the origin story. But oh my god on goes the Batsuit & the movie becomes unforgivably terrible, the sheer scale of the anticlimax was staggering. Why was his neck wider than his head & WHATS WITH ALL THE FUCKING SHOUTING!!!!! since when has Batman needed to shout at people to scare em. Christ I hated it! To add insult to injury what the fuck was Tim Booth ex-lead singer of the ever dreadful & Thoroughly evil manchester Indie popsters doing playing Victor, if that cunt sat down next to me he'd get a shoeing like he wouldn't believe.

On a more positive note Sin City rocked my world, thanks a lot to Buena Vista(thats Disney to everyone else)for releasing the worst DVD set of the year for Sin City in the attempt to cream more money off us all next year when they release the all singing all dancing Director's cut in the UK In January(It hits the US in December), what a bunch of Snow Blowers!

But Comic book movie of the year has to be A History Of Violence, Cronenberg back on top form with no typewriters trying to fuck people in the ass for a start, Mortenson finally proves that Lord Of The Rings was not a complete fluke. Maria Bello was just great, this movie really made my year, a true gem, hunt it down & watch it now, & the comic aint half bad either.

Yeah everybody watch NIGHTWATCH, bonkers & brilliant, still cant work out how they made this for only £4 million, the shot of the bolt coming out of the plane wing & falling all the way into somebodys coffee cup initiated a stirring in my man parts.

Not yet read the end of House Of M, but must say so far it has been fairly banal & inoffensive, not a great recommendation for a major marvel event story. Does anyone else remember when Bendis was a great writer? With the exception of the shining brilliance of Powers & the utter majesty of his Daredevil run, he has become a hack writer of the worst kind,& no i'm not a Hawkeye fan! Brian please stop writing so much, remember quality not quantity.

Looking forward to the crisis even though i'm not much of a DC bitch, so please dont spoil it for me.

Sorry been wittering on a bit there.

All information is useful!

It's about that time of the year again! I found a good place to get the buying a snow blower for cheap... But there are times of the year that I think it would just be easier to live in Florida.

Thanks, I needed a new snowblower. My last one just went up shit creek, and took my fucking paddle with it too.