Busy, busy week. I will try to get a in-depth review of Brighton - something which most comic sites seem to have somewhat floated over - later in the week.
In the meantime, here is some crap that I have been meaning to post on this blog for a few weeks mow

It seems I am not the only person fed-up with the adverts in Marvel products lately, but at least the message has got back to Joe Q. This from Newsarama.
NRAMA: While we realize as E-i-C this may not be your area per se, you usually have a comment or two and can refer us to someone who can comment [about the plethora of adverts of late]?
JQ: We're very aware of the problem and we're going to rectify it.
NRAMA: Is the answer as simple as to increase profit margin? And as a comic book reader yourself, do you believe there is a point where "X" number of ads is too many ads, and if so, what's that number for you?
JQ: We've heard the fans and we will make sure that their reading experience is the number one priority and not the ads. They will be seeing short and long-term resolutions in the next couple of weeks.

So maybe they do listen (Shawshank was right!!!). So far the adverts have found themselves somewhat repressed towards the rear of the comic, and the page count has crept down again.

No editorial needed.
But I am going to recommend the following site, especially the song: America the Burning. It is so preposturous it ends up being quite funny. The best thing is the woman singing as she sounds quite proud and extroverted, surely thats a contravine of the seven deadly sins? Fuck it, what do I know about God? I still think the whole "created the world in seven days" thing sounds like bragging.

Issue #0 of the new Transformers book has shipped, which I am sure most of you are aware of. Just a quick plug for the book as it is written by Simon Furman.
The book which ships from IDW and retails for $1 (about 80p) is available with a plethora of variants, ranging from affordable to silly.
The book, which I felt was a little sparse on Transformers, promises to gradually increase the character count as the astory progresses and is a more than welcome return to the "Robots in Dusguise" concept. Good things are expected from the ongoing, expected January. If you are having trouble finding issues, feel free to contact me and I can help you out.

I liked it, although its not what Asterix used to be what with only one of the creatros still being alive (it resonates half-completion in the way the latter day Red Dwarf novels did). I do however, just love the creator owned concept behind Asterix and most European comics, and I am supporting this book now because when the last creator dies (Udderzo I believe) then that's it. No more Asterix. 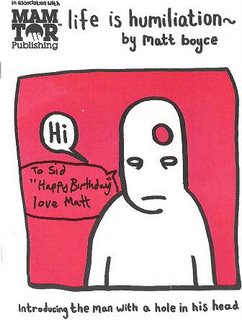 Matt Boyces debut book.
I think its a fantastic book and thankfully I am not alone. It has been selling well with very good feedback from both punters and fellow comic creators. Its big launch was at the Brighton Comic Expo (thanks to Liam Sharp - the nicest man in comics), more of which will be mentioned in a later post.
A lot of people pick up this book and say one of two things: "It's funny" or "Matt's a strange one, 'ent he?", I am looking forward to the first person I see pick it up and say "wow, as well as being funny, it's also incredibly poignant too". Some people cannot see the hidden depths behind characters like "the man with a hole in his head", it's a metaphor, a none too subtle metaphor but a metaphor still (I am sure that's far too many "metaphors" in one sentence, and this has only made it worse).
Posted by Sid at 3:27 pm

Where can I get one of these lovely looking "Life is Humiliation" books from.

Life is Humiliation is available from Comic Connections, ring us on 01295 268989.
We can also arrange for wholesale enquiries for retailers too.
The books retail for £1.50 - that's a bargain.