So, in case you're the one person who hasn't seen it yet, here's Spider-Mans new costume: 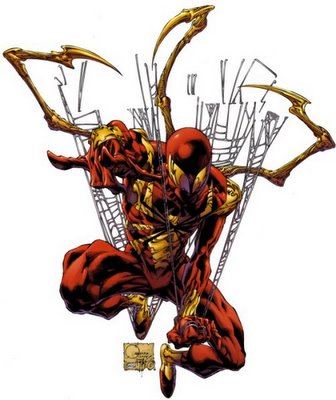 So, what do you all think? I've got to confess my opinion of utter apathy. It's hard to really hate something unless you've loved it first and with the treatment of Spider-man lately (sorry, The Spider) nothing Marvel does suprises me. I very much doubt a year from now anyone will even care that he had a new costume in the past.
Still, disparaging comments are always more than welcome, let me know your views.

ULTIMATE SPIDER-MAN #93 - Woo-hoo, Ultimate Deadpool. Hard to belive the Ultimate Marvel Universe got around to this team up before the regular MU. The pairing of these two could make for some comedy genius, it's been worth the wait to have Bendis pen it.

SPIDER-GIRL #97 - Cancelled at #100. The book made it to 100 issues, that's more than most recent Marvel books ever amount to without cancellation or renumbering. Its a shame to see it go, but I would rather a book gets cancelled while its good then drag on forever, it's what made titles like Preacher so good, it knew when to end (and that is the only time you will see a Preacher / Spider-girl comparison).

ARE #4 (of 5) - I hear very good things about this book, I am waiting until I have all five issues before I read it, after his work on "Hammer of the Gods" and "Thor", Michael Avon Oeming is more than suited to the telling of the Greek God of War's tales. If this character becomes a player in the up-comong Marvel crossovers, expect this book to rocket in price. 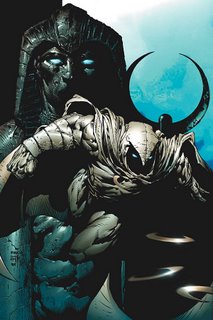 MOON KNIGHT #1 - Probably the second biggest book launch Marvel have this month and one of the most requested series on the Internet. So why do I find it hard to care? Probably because I am not a massive fan of "The Finch" or the Moon Knight character. Still, nice Bowen statue on the way.

NEW AVENGERS ANNUAL #1 - With "Illuminatti" last month and the annual this month, Marvel sure know how to capitalise on popularity with an overpriced book. Still, it's Bendis and it's the wedding of Jessica Jones and Luke Cage, so it should be great.

MARVEL ZOMBIES #5 (of 5) - Forget the single issues, go for the Tpb. Lets face it, it's a Kirkman book, you were going to anyway. Something about Kirkman, zombies and tpbs go together. Marvel zombies too. Good, sick fun. 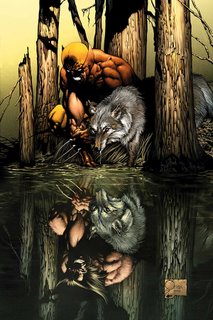 WOLVERINE: ORIGINS #1 - Without a doubt the biggest launch of the month. Forget the fact that its a superfluos second monthly Wolverine title for a second, and look at the creative team of Daniel Way and Steve Dillon. From their work together on "Bullseye" and "Supreme Power", we know they are a solid creative team. Heck, I will buy anything drawn by Dillon, and Way seems to realise where Steve's skills lie, with lots of Preacher-esque moments popping up in the previous collaborations. Oh yeah, and Wolverine has got his memories back and must wrong the people that wronged him because he's the best there is yadda yadda...bleh.

X-MEN: APOCALYPSE / DRACULA #3 (of 4) - Because you requested it! the most eagerly anticipated crossover of the millenia. This is why Timely set up shop all those years ago before becoming Marvel, to bring you Apocalypse Vs. Dracula. Fucks sake, this makes Jesus Vs. Predator look poignant.

SPIDER-MAN: THE OTHER HC - I have the first prints, I have the second prints. I hated the story. Yet I will probably buy the HC. Why? Because I am a fucking useless comic whore with nothing better to do than whinge about the comics I can't stop buying. I am everything that's wrong with the industry and everything I profess to hate.

UNCANNY X-MEN OMNIBUS VOL. 1 HC - Oohh, Claremont / Byrne. Reprinting Giant Size X-Men #1 and Uncanny X-men #94-131. Nearly the complete, title defining collection by these two (once) comic greats. If you don't own the originals, get this. it contains some of the most important X-men stories ever told. You will never find a better X-Men run, unless you buy...

ASTONISHING X-MEN VOL. 1 HC - Joss Whedon recreates the X-Men with the best stories since (see above). I'm sure most of you will have this in singles, but it's damn difficult not to buy this too.

IRON MAN: DEMON IN A BOTTLE TPB - and finally, taking a cue from DC, Marvel seems to be bringing some of there classic stories into full colour reprints, with both this and the "Dark Phoenix" saga available this month. Watch and laugh as Tony Stark sinks further and further into the abyss with this critically acclaimed alchoholism storyline.
Posted by Sid at 11:35 am

"I hated the story. Yet I will probably buy the HC. Why? Because I am a fucking useless comic whore with nothing better to do than whinge about the comics I can't stop buying. I am everything that's wrong with the industry and everything I profess to hate."

just stop buying them, you will feel a weight lift from you shoulders and your wallet will appreciate it as well

sent an email to the shop a while back but recieved no reply.
Has Local #3 come into the shop? and if so have you sold out? Glyns no help at all with this one.

Local #3 is out, but we sold out before it even hit the shelves, reorders have been placed with your copy in mind. If you ask Glyn about a "local", he will think you are talking about the Wine Vaults.

Now if they will only use Captain Lapain (The French Avenger).