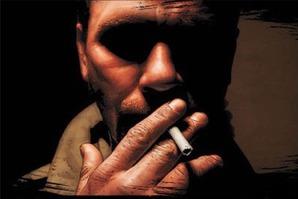 Do you remember when Hellblazer used to be good? I do.

It was 1999, and we were all getting ready for the promising new millenium. Hellblazer was coasting along just fine with Warren Ellis as new ongoing writer, the book was set in England and selling reasonably well without any thoughts of Keanu Reeve's or American.

And then suddenly, Ellis was gone.
Then came the dark times, then came Azzarello.

60 issues later and Hellblazer has still yet to recover, admitadly the Mike Carey run wasn't as poor as the Azzarello, but it was no where near the heights of Ennis or Ellis.

So what prompted Ellis to leave?

The story created for Hellblazer #141 I am about to show you. It was due for release just a few weeks after the Columbine Highschool Shootings but DC got cold feet (understandably so) and pulled it.

It is one of the single best issues of a comic I have ever read, it is a cautionary tale for all generations and could stand tall as one of the best pieces of modern literature the comic medium has ever produced, yet it has never been released.

That was awesome. I've been meaning to ask you for the link to that for a long time so thanks for putting it on your blog.