SPIDER-MAN: THE OTHER More whinging

Well, there's less adverts in these issues, so that's a start.

The first half of this issue recaps the last issue and then goes into a well-executed, but ultimately superfluous dream sequence, where absolutely nothing is seen or realised that hasn't been said or done before. It gets better though, with a very JMS diatribe: "We take that which is inside...and move it outside...and then it is safe", meaning that Peter dressed himself up as Spider-man, because that way he can undress the Spider to be Peter, instead of fully embracing his Spider powers. Got that? No? Oh.

It does make sense if you reread it, it's just a little contrived.

So to summarise, the Spider has refused to die where the Man accepted death, therefore Spider-man is reborn with an even more dominant spider aspect. A slight scientific explanation is given as to the rebirth of the spider, apparently once in a spiders life cycle they can shed their skin and be figuratively reborn, but obviously there is a very mystical quality to the whole totemistic theme to Spider-mans powers. Which is an interesting route to take with a character very much born of science in the nuclear age.

So yeah, Peter is reborn, and Tony and Cap reveal they thought he might be regenerating but didn't want to say anything in front of MJ or Aunt May in case they were wrong, which is great, because all the shit they've seen over the years you would have thought they could make the leap upon finding his withered corpse (the one from last issue which was drawn badly).
But what does the future hold for a man who may be more Spider now than man. keep reading.

The Other Part 10: Friendly Neighbourhood Spider-man #4

I love Mike Wieringo's artwork, check out his blog here for some awesome sketches.
It's a health check for the recently reborn. A veritable cornucopia of the brainiacs of the Marvel universe: Tony Stark, Reed Richards (does he ever change his clothes?, Wife Beater (Hank Pym), all we really need is hank Mccoy to complete the set. It's nice to see this, Spidey has always been a bit detached from the core of the MU and since joining the New Avengers he has been able to make use of other peoples talents.

We take a break from the Spider-man The Other story-arc to come back to an old Paul Jenkins plot-thread, Eugene "Flash" Thompson. Apparently out of his dribbling vegetative state and applying for a job at his old high-school as Gym teacher, he seems undamaged from the coma until the last panel, where it appears he is pulling a "Memento", having no memories of Peter Parker since they were at high School together (so he's just glossing over the whole Vietnamese bride / hobgoblin debacle - we all should).
Back to Avengers tower, we see Peter's spider-sense is even more heightened as he instinctually overreacts to a friendly gesture from Tony Stark, before Peter and his wife go out for a night on the town (who would have thought they were Swingers?*).

Not a bad issue in all, we have a JJJ cameo, a handbag theft scuppered and then Peter's spider sense goes off big time and he fall's out of the air, coming to moments before impact, he realises there is something wrong at Avengers tower.
Avengers mansion is covered in webs, and after Spidey has investigated he finds that cannibal spiders have eaten his body (sounds like an emo band). Upon facing his feminine-esque arachnid-powered spare reanimated corpse (again, sounds like an emo band), the thing I was hoping wouldn't happen happened. He produces his stingers. His foe - hereafter known as The Other - runs off out of the mansion, hoping to fight again another day.

I hate the stingers.

The Other Part 11: Marvel Knights Spider-man #22

It's contrast time again. From the smooth, fluid grace of Wieringo's subtle pencils to the studio finished, computer enhanced balls imagery of Pat Lee. Oh well, let's get on with it.

Chase time, annoying villain, clichéd dialogue, and that's the first three pages. It seems the body has come back to life because Spidey has, with a very limited, primitive brain. A sparse explanation of the Stingers fobs them off as "In the future, spider's will have stingers, you are the future", it's all a bit self-perpetuating really, but on with the show.
Oh look, the Spiders have dissolved and gone down the drain, along with my interest in the issue.
You see, the thing that really pisses me off with this character is that Garth Ennis already did it in "Tangled web #1-3", and it wasn't good then, so why bother again? (Available in back issue if you want it?).

On with the issue. Ooh, Jarvis with a strop on (I said strop, not strap, this is the Avengers not the Ultimates remember), nothing happens for three or four pages and then it's revealed that Peter doesn't remember eating Morlun's head and MJ decides to let it go for a while (got to have the hanging plot thread).
In another interesting use of his extended contacts, Spidey goes to see one Doctor he hasn't seen yet. The Sorcerer Supreme, Dr. Strange. He explains to Peter that "The Other" is a cosmic corrective response to the disturbance in the force that Pete made by coming back from the dead. And that his eye has grown back. See, 6 years of schooling wasn't wasted on Stevie.
We all know that Spider-man and Peter Parker are driven by guilt, so it seems only
fitting that he is feeling survivors guilt over coming back from the dead, but a good old chit chat with Aunt May pulls him out of his funk. In a way I miss the good ol' days where Peter and Aunt May would have exactly the save conversation, but without her knowing he is Spider-man, and she would still say exactly what he needed to hear. 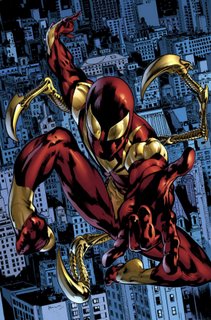 And then we see another fucking cocoon.

More test's with Tony Stark greet us on the first few pages, I suppose they wish they'd done all this with the symbiote way back in the day, so it's best to be safe, and Tony isn't completely convinced that it is Peter back from the dead.
After seeing an image of "The Spider" in a mirror, Spidey goes out webslinging to ponder, as he does. JMS throws in a few nice pages of comic relief, which is one of my favourite thing's about his writing on Spidey, he is good at balancing the character with comedy.

The comic really kicks after this, with a minor scale emergency for the super-hero which can really help showcase his new-found abilities, because apparently spider-man didn't have enough strength, speed and ability before.
A building has fallen down and Spidey ventures into the rubble to look for survivors, it is here that his first new power is made clear: his ability to see in the dark. I hate this power, it is utterly redundant. His spider-sense is more than sufficient to help Spidey through any situation, I remember an awesome Avengers annual in the '70's or '80's where Black Panther and Spidey are getting their respective asses handed to them, and then they take out the lights, what with Black Panthers heightened senses and the spider-sense, they work effortlessly in silent communion to beat the shit out of the foe that was troubling them mere moments before.
Still, his other newly acquired power is very cool. For those of you not in the know, Spidey now produces his webbing organically (no, not like Tesco organic cucumbers, he make's it himself), but with his new power he can now sense vibrations through the webs, like a spider can with trapped prey. so in a search attempt for an injured girl in a collapsed building say, he can fill the area with webs and then follow any vibrations to there source (although, who's to say that Spidey couldn't have done this before anyway, it all depends on how sensitive the respective writer makes his spider-sense).
Of course, Spidey finds the injured girl in question and escapes moments before the building collapses, happy ending...of sorts.

As "The Other" draws to a close, we then get an introspective monologue from Peter to MJ, explaining when he got his powers he never looked at them too closely for fear of finding something he didn't like "The child never asked and the man never returned to the question: what happens when you merge a man with a spider".
Of course, we then get a shot of Tony working on that new bloody costume. 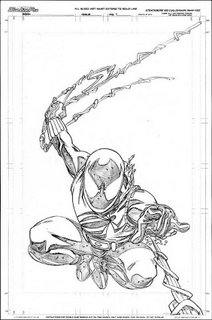 So all in all, was "Spider-man: The Other" any good?
You know, some of it was inoffensive, but for the most part I could have lived without it. Some superfluous changes have been made to his powers, it's set the stage for a new costume and introduced a new villain who seems to offer nothing unique to Spider-mans excellent rogues gallery. But this is all from a crossover which got more press attention for its variant covers than it did its storyline.
Thankfully, I don't work for a magazine so I don't have to rate this story line. Read the descriptions of the issues, if you think it sounds good, it might do it for you. But for me; if the choice is "Evolve or Die", I'll pick the latter.