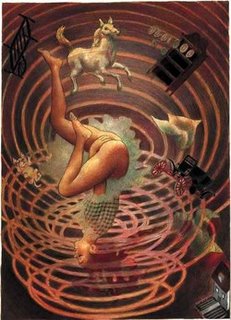 "In countries like the U.S. and Great Britain, we exist in a wholly sexualized culture, where everything from cars to snack food are sold with a healthy slathering of sex to make them more commercially appealing. But if you're using sex to sell sneakers, then you're not just selling sneakers, you're selling sex as well, and you're contributing to the sexual temperature of society. You're going to get people who, unsurprisingly, become overheated in that kind of sexual environment, and if they attempt to assuage their desires by resorting to the widely available medium of pornography, they're going to have their moment of gratification, and then they're going to have a much longer period of self-loathing, disgust, shame and embarrassment. It's almost like a kind of a reverse Skinner-box experiment, where once the rat has pushed the lever and successfully received the food, then he gets the electric shock." - Alan Moore

God damnit I am really looking forward to the Lost Girls HC. In the last year I have become a real big fan of Alan Moore, this weekend I (finally) read the League of Extraordinary Gentlemen SC's and was very impressed by the quality of the work, all of the characters have real fucking character and serve a real purpose to the story. I can see the LOEG joining the hallowed ranks of Watchmen, V for Vendetta and Promethea as books I always come back to.

Obviously, an awful lot has already been said on the subject of Lost Girls, and I am not going to add to it until I have sat down and read said title, instead I will point to a few places that cover it quite well.