Heath Ledger is The Joker. 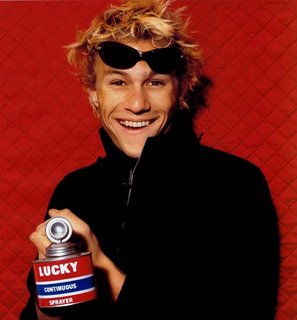 BURBANK, CA, 31 July 2006 - As a follow up to last year's blockbuster Batman Begins, Christopher Nolan is set to direct Warner Bros. Pictures' The Dark Knight, written by Jonathan Nolan, based on a story by Christopher Nolan and David Goyer. The film will be produced by Emma Thomas, Charles Roven and Christopher Nolan. Additionally, Christian Bale will resume his role as Bruce Wayne and Academy Award nominee Heath Ledger has been cast as The Joker. The announcements were made today by Jeff Robinov, President of Production, Warner Bros. Pictures.

Christopher Nolan revamped the Batman franchise in 2005 with the immensely successful Batman Begins, starring Christian Bale in the title role, which chronicled the early years of the superhero. Nolan first garnered attention from critics and fans in 2000 with the groundbreaking drama Memento, which he wrote and directed. He went on to direct the thriller Insomnia, starring Al Pacino and Robin Williams, and recently wrapped production on The Prestige, with Hugh Jackman and Bale.

Bale was most recently seen in the ensemble cast of Terrence Malick's The New World. His other credits include Little Women, Portrait of a Lady, Metroland, American Psycho, Laurel Canyon and Steven Spielberg's Empire of the Sun, which was his first starring role.

Ledger most recently earned Oscar Golden Globe, BAFTA and SAG Award nominations and won the New York Film Critics Circle Award for Best Actor for his portrayal of Ennis Del Mar in the award-winning drama Brokeback Mountain. His other credits include Casanova, Monster's Ball, Lords of Dogtown, The Brothers Grimm and The Patriot.

"Chris' unique vision is what made Batman Begins such an outstanding film and we could not imagine anyone else at the helm of The Dark Knight," said Robinov. "We also can't wait to see two such formidable actors as Christian and Heath face off with each other as Batman and The Joker."

"I'm excited to continue the story we started with Batman Begins," added Nolan. "Our challenge in casting The Joker was to find an actor who is not just extraordinarily talented but fearless. Watching Heath Ledger's interpretation of this iconic character taking on Christian Bale's Batman is going to be incredible."

Production is set to begin on The Dark Knight in early 2007.

Nolan and Ledger are represented by CAA.

Comments and thoughts people?
My thinking is simply that I have faith in Nolan and the production team, and the best thing we can do is wait and see. Having said that, Heath Ledger doesn't seem the most obvious choice.
But neither did Reeve, Rourke, Routh or Keaton for there respective comic movie roles, as long as Heath doesn't have Cesar Romero's fucking moustache I will be happy.

Ryan - Just thought I would add this from the Newsarama Blog, gotta love Photoshop

10 things I hate about you – Showed he can do the calculating nut ball, Watch him trying to woo Julia Stiles by paying off the announcer techie, taking a mic and storming around a HUGE high school football field singing some old scmatzy 70s love song while he's being chased by the rent-a-cops.

The Order - Plays a priest looking into the possibility of an Anti-Pope... will give it a look over soon, have it on good recommendation that he can pull off the brooding guy wandering the darkness with ease...

Paint his face white, cut and dye that hair green, he can do the crazy, good casting move, just got to wait and see how the rest pan out.

And with Ryan Phillipe rumoured as Two-Face and Phillip Seymour Hoffman rumoured as an ‘arms-dealing’ Penguin we have plenty of castings yet to be finalised.

Seeing as it’s this area, anyone going to that Caption comic convention this weekend? Is it any good?

Pete said...
This comment has been removed by a blog administrator.
1:16 pm

Pete said...
This comment has been removed by a blog administrator.
1:16 pm

I trust Nolan totally. He can xast who he likes.