QUOTE OF THE WEEK (shamelessly yoinked from Lying in the Gutters, blatantly):
"I am GLAD this asshole is dead. Sorry for his wife and kids, but relieved they are in no further danger from his lunacy!" - John Byrne on the death of Steve Irwin.

How would Bryne like it if I said I wish he'd die so he'd stop making crappy comics? Well there you go, I just said it. No more Blood of the Demon or Atom, and my X-Men / F4 collection might increase in value. I can't see a downside (other than wishing someone was dead). Can anyone? 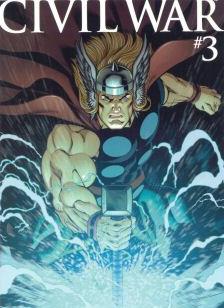 Thor - confirmed series written by JMS. Obviously I am going to think this is a good thing as I am a JMS whore? Thoughts, people? Artist is yet to be announced, expect to see a return of Don blake and the rebuilding of Asgard after the events of Thor Dissassembled.

Supermarket - Excellent read, Brian Wood does good yet again. For those of you who skipped on Couriers and Cous-cous Express, this is what you were waiting for. More defined and with a stronger protagonist, not to mention a healthy dose of Wood social commentary. Check this out when the Tpb arrives.

Nightwing - Thank christ that was the last issue by Bruce Jones. I know DC originally planned to kill Nightwing during Infinite Crisis, maybe that would have been a mercy killing compared to what we've had instead. Hopefully Marv Wolfman coming onto the book will help lift the character back to where he should be. 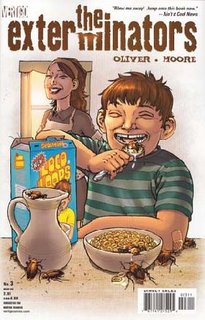 Exterminators - Just to reiterate on a review Ryan wrote a month or so back. Exterminators is a fantastic comic, and all fan's of good quality comics (especially Vertigo) should consider this a must have, this means all you Preacher fans.

Grounded - After having heard a few good things about this Image series, I decided to check out the Tpb. Although it wasn't bad I got half way through, and haven't had the drive to pick it up and finish it. The story consists of a kid, whose parents are massive superheroes, being sent of to a school for superheroes in training, but he is the only kid at the school who has no powers.
I'm sure I saw this when it was a Disney flick?!?

Damon Lindeloff / Ult. Wolverine Hulk - Had a lot of people ask about this one lately. No, you haven't missed issue #3, it still hasn't shipped.
However, Marvel and Damon released a press release today explaining and apologising for the delay, but it came with the threat "THE FOLLOWING LETTER IS FOR RETAILERS! ONLY IT IS NOT INTENDED TO BE POSTED ON THE INTERNET. Anyone found doing so will be removed from receiving the Marvel Mailer."
Thanks a lot guys, you give us an explanation but we're not allowed to pass it on to the fans, the people who actually make both us and you money.
(The Marvel Mailer is a newsletter where we find out about schedule changes and ordering information for rush release variants and second prints - obviously being excluded from that would not only fuck us over, it would mean you guys miss stuff too).
To summarise, there is no real reason for the book being late other than the writer hasn't done his job yet. Which isn't a massive shock when you think about the track record of people who predominantly work outside the comic industry.
Although he does manage to compare his miniseries to Watchmen. Hmm.
Posted by Sid at 11:10 am

And Exterminators has been getting better and better with its second arc, the idea behind the series is beginning to come out.

Though thanks to a very intelligent/perceptive fan on a radio podcast interview with Simon Oliver I'm pretty sure I know where this is heading. But I'm on for the whole ride, Oliver says he has an end in mind and a round about issue number for it. I love a good contained finite series.

And from the couple of back issues of Doom Patrol I picked up today, I think I've found another great series I'm looking to read.

To be fair, Byrne said that after seeing the pic of Irwin and his baby vs a crocodile for the first time.

Hurrah on the rest of the news, though!