"There were other casualties too"

Got to make this quick today, otherwise none of you lot get any comics in November.
Yeah, it's paperwork day.

Morrison on Batman
Sorry Ryan, looks like he is off fairly soon, the Previews for December show Ostranger on the book for at least 4 issues.

Lost Girls
16 chapters out of 30 done and dusted, I only picked this book up yesterday and only meant to flick through it last night, but before I knew what was happening I was engrossed, and not just because there were tits on the page.
I've been really looking forward to this book, it became apparent to me a few weeks ago that the 10 copies we ordered for the store were not going to ship to us. so I paid ACTUAL cash - full price too - out of my pocket. Haven't done that for a while I can tell you.
Glad I did though, as we are already on a third printing of this book with no sign of a UK release, it's always good to have first printings if possible.
So far, it's been an excellent read, albeit one that I won't be able to share with many of my housemates or my friends because 1) it's just porn and 2) there are male gay bit's in it, shock horror (funny how most guy's I know don't consider two women going down on each other to be gay)!
Lot's of things have already been written about this book by people much more eloquent than I, but I would like to comment on the format of the book as it is so interesting, and controls the pace of the story nicely. 30 chapters comprising of 8 pages each, broken down into 10 chapters per hardcover, all collected into one nice big slipcase. A very interesting format which must have been at times bitterly constraining, however it has oft been said that writing within self-imposed boundaries sometimes leads imaginative and freeing writing.
Just a great read. 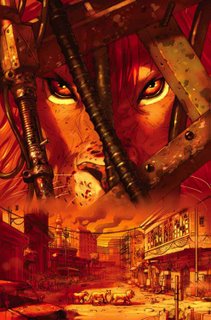 Another book I would have quite happily paid full price for (the perks of working for a comic shop mean I didn't have to, but it also means my take home wage is shite, rough with the smooth and all that).
This is definately a book I am going to lend out time and time again, until it comes back to me broken and battered, but loved by all.
I must get this out of the way, when I first started reading I was feeling large levels of parralels to The Lion King, and not just because there are Lions in it either. The cub in the story is drawn so much like Simba on the first few pages it's untrue, and then in a flashback to the jungle we see a character who has remarkable similarities to Scar, down to the fact you could almost hear Jeremy Irons.
However, these fears are unfounded, as all the characters find their own voices before the book is done to become much more whole, complex characters than the two-dimensional morality pawns that Disney created. 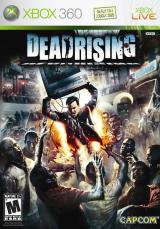 After struggling through the entire game, AND overtime mode to get the true ending (shit cut scene where the main character seemingly give's up, followed by white text on a black screen saying "actually, he did get out") I have come to the following conclusion:
This is a shit game with some really shit bits.
Don't get me wrong, there are some great moments, but they are few and far between and you have to face an increasingly more frustrating save system and annoying as fuck boss battles.
The first thing you need to realsie, the threatening army of the un-dead drop like flies. You can dispatch a zombie with a quick smack round the head by a 2" by 4", or a couple of stabs with a knife, one slice of the katana ar by running them over with a trolley.
Any human you encounter in the game though, can survive multiple bullet head shots, a couple of chainsaw slices and several stab wounds before dropping. And I thought zombies were supposed to be the threat.
Case in point: The SWAT team, I shot one in the head 12 times with a sniper rifle befor he dropped. 12. That's amazing. It actually takes less punchs to kill one. In fact, the big end of game boss you have no weapons for and have to dispatch with jumping kicks, which is probably a blessing in disguise, had I had, weapons I know doubt would have shot him oop-side the head 15 times without causing any damage and not known why.

There are some good points to the game, but remember I am telling you these now to ease the blow of the save system which I will recount for you in a paragraph or so's time.

The sheer scale of the game is amazing, I have seen upwards of 150 zombies on screen at the same time. The game has pushed towards 200 zombies at times and I have noticed a bit of slowdown which is discouraging for a next-generation console, but fuck it - the 360 is out now and the PS3 seems to be a fable doomed never to come into fruition.
The other thing to love about the game is "moments", every person playing this game will have a different experience, or will take a certain boss down a different way, or will have a story about saving one of the 64 survivors which is unique. GTA3 was a game built around peoples "moments", it's these non-linear differential's that make the game worth talking about in public.
A great moment for me was when I was fighting Cletus, the psychopath holding the fort at the gun store. As you can imagine, the gunstore is quite a strategic place to have access to, so disopatching Cletus is well worth doing. It took me about 8-9 attempts to kill him; learning his attack pattern, the best way to wear him down, how many times to shoot him etc...etc...
It was becoming quite annoying, and after using 30 sniper bullets I had the guy down to his last bit of energy, coincidentally I was also down to my last piece of energy thanks to his uncanny ability to make his bullets bend around solid objects. Realising I was out of bullets, I picked up the store display I had been hiding behind, ran at Cletus and swung wildly (I may have screamed at the tele too) as a last ditch attempt to kill the fucker. It worked, and saved my cordless pad from flying through the TV in frustration.

Incidentally, the wireless pad is an odd piece of kit. I kind of prefer a wire, and have quite a few times moved the pad in such a way as to free the wire which isn't there from a trapping that didn't hold it.

The game is silly fun, and most things you can use to kill a zombie, golf balls, skateboards, coat hangers, The Golden Axe (good enough for Death-Adder, good enough for you) and footballs. the first time you drive a car through a thpusand odd zombies is gauranteed to make you smile.
If you make it that far.

The main quest is determined by being in certain places at certain times, but thanks to the incredibly simple minded and non-play tested save feature, this can become a chore. It is wholly possible to save your game mid-mission, finish the mission and then be told that you have failed the next mission (it doesn't tell you why, but it's because you weren't in the right palce to activate it at the right time, cheer's Capcom). When this happens, the only option is to start again from the beginning, I know this, because it happened to me.
You only have one save file through the entire game, no staggered saves, no mission selction when you have completed the game, and the saves come few and far between. The amount of times I scraped through a boss battle only to be finished off by a simple, lone zombie.
The simply addition of save's post mission / boss, or even a second save file would have made all the difference in this game.

Yeah I caught the Morrison news last night, guess I jinxed it with my post, all I can say is that I hope that it gives him and Kubert some time to get some issues in the bag.
From the sounds of things this 4 issue mystery has been on the planner for a while. And that after it Morrison will be back on, he's made it clear he wants to stay on as long as he could and he's said that he's got the next of his 12 issues plotted.
But then the question is why didn't it start before Morrison's run? But if it helps them continue with a run after this with no delays and fill-in artists I'm all for it.

Saying that I'm looking forward to the Ostrander and Mandrake issues. All I've heard from them has been good things since this news was released

Lost Girls- I read the first two books a while back (released from kitchen sink) when you couldn't find them anywhere in a cbr. From the sounds of it the format of the book has changed. There wasn't any separated chapters in what I've read. I will buy the book, but I'll be waiting for the UK release

Pride of Baghdad - Another book I want to get around to reading, heard nothing but good things. It's a money aspect though. As soon as I find out how much I am living on at Uni, this is the first OGN I think I'll probably spend spare book money on.

Dead Rising - Ill pick in up in a few years once I can afford a 360, as of now, It'll be a Wii all the way for me. Though the Halo 3 release will probably push me to picking up one quicker.
Have you seen the cover to the new Halo book?
If it follows the continuity of the games, it looks like we might be seeing some proper co-op with different Spartans.
And I'm still holding out for a counter operative mode alla Perfect Dark in Halo 3

I had been waiting for more than a decade for Ostrander and Mandrake to do a Batman story together. Screw the complainers,if you've read stuff collaborated by these two, you'd know the chance for their fill in to be at par or better than the current team is high.