TIME MAGAZINE CITES WATCHMEN IN TOP 100 NOVELS
Time Magazine ran a feature on their website highlighting the Top 100 Novels of all time, Watchmen featured on the list. Long cited as one of the best graphic novels of our time, it's nice to see a comicbook being featured up there with the true literary giants.
http://www.time.com/time/2005/100books/0,24459,watchmen,00.html

Entertainment Weekly dedicates five pages of its October 28 issue to WATCHMEN, comparing it to Citizen Kane, Sgt. Pepper's Lonely Hearts Club Band and The Sopranos as "a masterwork representing the apex of artistry in its respective medium."

It's no big news that comics are picking up media attention still, what is impressive is the level of acclaim they are recieving. Watchmen is currently voted 6th on the Time 100 list (and that's voted by the readers, not by the magazine). As well as big magazines, we also have websites trying to bring comic series to the masses.
http://www.happynews.com/news/10252005/transmetropolitan-graphic-novels.htm

It's not just the powerhouses like Watchmen and Transmetropolitan getting reviews either, Stephen Holland of Page 45 utilised his entire column in this months "Comics International" to bring the attention of Strangehaven to peoples attention.
It seems to me the only people not paying attention to whats really happening in the industry are the comic fans.
Sorry guys, but I am calling you out.

Is it me or are us lot some of the most negative, bitter people involved with any "fan" base? every time a comic gets noticed, or something different comes along, people seem to start setting up the storm barriers: "It's our industry, we don't weant new readers coming in challenging our opinions". It's the mentality of "I'm alienated by my peers for reading comics, therefore I must be a true fan". 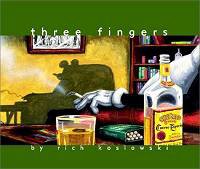 Case in point: Time Magazine's Top 100 novels, there were quite a few people online coming out with crap like "...but it's not a novel", or "Technically, it's a Tpb, not a Graphic Novel" or worst yet: "Isn't Time owned by Warner Bros. who own DC? Isn't that suspicious?" Fuck off. Fucking twat's. One, yes, its literature, therefore its a novel by proxy. Two, does it really matter if they got the terminology wrong? Oh, excuse me, it makes such a big difference, I was going to read something refreshing and expand my consciousness and facility with language but they called it a graphic novel not a tpb so I won't fucking read it, or anything which doesn't have a red "M" in the top left corner. And 3, yes, Time Warner does indeed own Time magazine and DC, but for fucks sake, think about it, even if they are forcing the inclusion of Watchmen onto the list, is it really a bad thing? Besides, they named Art Speigalman in the Top 100 People poll earlier this year, as written by Marjane Satrapi, that's hardly going to turn a profit for DC or Time is it? Some comic fans piss me off.

Don't get me wrong, the majority of my customers are great. They listen to recomendations, they talk intelligently about the things they don't like, and even more eloquently about the things they do like. They have hobbies and interests outside of Cap and Bucky, they go out, watch interesting movies, listen to diverse movies, and even recommend fresh comics to me that I have never even heard off. There are a few comics shops like this up and down the country; obviously I don't know all of them, but two of the best I have heard off are Nottingham's Page 45 and Leed's OK Comics. But unfortunately, most of them have gone the other way, unclean, unfriendly, unapprocahable and unorganised, basically a whole lot of "un". Hopefully, with time, more comic shops will follow suit with the stellar exaples listed above, we might even see the gradual fazing out of Star Wars toys and Magic the Gathering. 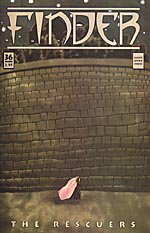 , we hear they are hot books, Wizard run a six page article and we all check them out. Which is fine, because they certainly are not bad comics, by any sense of the word.
Then there are the critically acclaimed books; stuff like Ex Machina, Finder and Battle Hymn. These are the books that the people working in the industry buy / read. You think Warren Ellis reads New Avengers because he wants to (if at all)? No, he reads it because he cares about the industry and wants to see what the top sellers are doing, as a professional its in his best interest to analyse the industry (something which very few creator's seem to do).
These titles, which sell no where near the 248,000 units of the top sellers, are the titles really driving the industry forward. These are the titles that make Marvel and DC take notice, the breeding ground for future talent, Bendis! didn't just get handed Ultimate Spider-man on a plate, it was the sweat, blood, tears and arrests his put into the making of Torso, Jinx and Fortune and Glory which got him noticed as an industry professional. 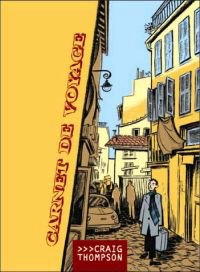 Yet most comic readers would be hard pushed to identify the names of Criag Thompson, Dan Schaffer, Carla Speed Mcneil, Dan Clowes, Art Speigalman, Marjane Satrapi, Andi Rutton, Andi Watson, Alex Robinson, Rich Koslowski, Scott Morse, Scott Mcloud, Jeffrey Brown and countless others. Heck, some comic readers wouldn't be able to tell me who Will Eisner is.
But this is where the real progression is being made. These are the books which are getting noticed outside of our very blinkered, spandex only genre-within-a-medium-which-defines-a-medium.

I'm not saying don't read New Thunderbolts, Spawn or Teen Titans, as I love my superhero comics more than most (and if I did have a problem with superheroes, that would make me all negative and hypocritical), they just don't define my reading. All I'm saying is; next time you feel dissolusioned by an 8 issue crossover, next time you finish reading two superhero's punching each other in the face and think "it's all a bit samey", just remember, you are the only person limiting your exposure.
Posted by Sid at 3:24 pm

That was a nice top 100 list, I've got a few problems with it but all together it managed to pick up a lot of class books, still can't believe they picked Catcher in the Rye yet would leave out The Bell Jar. Plus aren’t you just a little saddened that fear and loathing or the campaign trail never got a mention?

Anyway just something I noticed recently, pick up (or rather don’t pick up) ‘Will you still Love me if I Wet the Bed’. Liz Prince’s comics are apparently ‘made up of short vignettes that capture all the cute, gross, and endearing aspects of relationships’, I’m sorry but saying this was influenced by Jeffrey Brown does him no justice at all, it’s just an inferior copy. Same story telling method, same simple drawing and box layout, and same attempt at transcribing a relationship yet worse in every way, how did this rubbish get published.

Yeah, definately missed Campaign Trail, and I think its a travesty that Brave New World wasn't on the list - if we are talking dystopian futures that book is the shit, it's even more relevant than 1984 (not out-dated in name for a start) and feel's like it could have been written yesterday.

I think you nailed how it got published with the Jeff Brown comment. Its like, if I made a comic with a chainsaw-weilding chinchilla who hangs around with a stillborn baby, it would get snapped up the slave Labor community.

I agree with a lot of what you're saying in regards to expanding the medium and getting people outside the clubhouse into it, but I'm still sticking with the "it's not a novel" thing.

One, yes, its literature, therefore its a novel by proxy.

Well, no--literature isn't necessarily a novel. Literature can be poetry, drama, prose (fiction or non-fiction) or even comics. But, even more, I think treating WATCHMEN as a novel (or any comic, really) is doing a disservice to the book and to the medium. I know it's a pedantic engagement in semantics, but a valid one--we can treat comics and film as literature, but treating them as novels disregards half of how the story is delivered.

Despite that, it is heartening to see more attention being paid to comics in Time, The New Yorker, Entertainment Weekly and other publications.

Yeah, okay, sensible arguement, well put - I agree with you. My point is I can't see what harm it causes calling it a novel, when you think of the way that the majority picture comics and comic-books.
Yes, it is it's own medium with its own unique method of story-telling, capable of being as diverse as film, tv, radio, books etc... So yeah, calling it is a novel is a disservice - but it's still a hell of a lot prettier than the common public perception of the funny-book.
but we are getting there, one step at a time.

I completley agree with you, now the only people stopping the industry move forward are comics fans.

They buy books by pat lee.

They buy books by Micheal Turner.

they like to scare new people off, i have seen them in there shops belittle people who look new who want a comic because they have heard about how good joe sacco is, but dont wan to read about aquaman or fucking sub diego.
(and for some reason i hagve had people in some comic stores attempt to belittle me!....oh how they fail)

I hate most comic stores i find them embarrasing, and an insult to the industry - i find the attitude of alot of retailers stink, Im am a comic book obsessive and i find these places a little hard to venture into, imagine what a new /casual reader must think!

And i hate a good chunk of comic readers, nearly as much as i hate vegans and goths.

Today Im in a bad mood, actually i hate people all round.

"wash these turds off of me that stain my life!"

Oh by the way I have a comic coming out next week it hasnt got superheroes,titular she-ra's or explosions but it has an old man pissing himself in it!