Although I have not been posting much the last week, rest assurred my head is absolutely swimming in comic theory and supposition at the moment. Too much in fact, my head is moving faster than the ideas can be written. I would imagine sometime next week we will see a series of column entrys, but for me, the rest of the weekend is taken.
My weekend is full. Tonight I am trying to squeeze the Ultimate Avengers movie in before heading out to Oxford, for the awesome "Mighty Boosh" live. Tomorrow is wrestling day, with the biggest BAWA show to date planned with me taking part in 3 of the 6 matchs. If I get through all that in one piece I am off to Nottingham to visit the excellent Page 45 (the most important, pioneering comic shop in the country) as a precursor to seeing the Darkness live.
Yeah, I know: Darkness are hardly my idea of a great band either, but my best mate loves them and if you can't support a mate what can you do, besides, the posse going pretty much guarantee's a bloody good laugh.

But comics are going great at the minute, the May Previews releases are all up now at www.comicbookresources.com, and except for the usual run of the mill Marvel / DC stuff, we have the forthcoming "Civil War" crossover, a brainchild of Mark Millar, not to mention the all important 52 from DC Comics.
For those of you not familiar with 52, stay tuned. I have been meaning to post an essay about why DC kick ass at the moment for the last few weeks which will showcase 52 in all its glory. 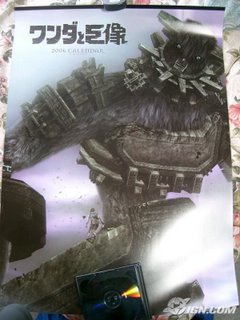 If any of you out there in comic reading land have a PS2 in your house, do yourself a favour and pick up a copy of "Shadow of the Collossus", its an amazing game visually and a delight to play. I would mention its by the people who made "Ico", but most people ignored that upon release. Still, Ico has been re-released as a budget title (£20) to conincide with the release of Collossus, which is way cheaper than the £70 the original goes for on eBay.

And starting this week, I am setting you all homework. Read (or re-read) "V for Vendetta", I will open a post in two weeks time (the 3rd of March to be precise) for people to discuss their thoughts and feelings on the book and forthcoming film.
Of course, I will probably end up deleting the post after peoples lack of comments, but its worth a try.
So what's your incentive to read "V for Vendetta"? Howsabout a money-back guarantee? Yeah, you heard me. If you buy V for Vendetta in the next 2 weeks from Comic Connections, Banbury any unsatisfied customers can return the book for a full refund, providing the book has not been damaged in any way.

And to conclude, I am rapidly heading towards 100 posts on this website, which is quite a milestone, as most people cannot rack up 12 posts on their blogs without running out of things to say or posting a picture of their cat.
Posted by Sid at 3:13 pm

Hmmm, money back guarentee... But first I need the money to purchase it... DAMNIT!

Ah yes, Miller's having one of those moments, it's a geat way of getting the mass-media to look in our direction, but if all they see when they look is another low-brow, ill concieved piece which does nothing to help the industry or say anything positive, do we really want them looking?
Mr Miller says that it's no different to Superman or Captain America hitting Hitler, but I would like to think the comic industry has evolved a little in the last 60 years. To come from Cap Vs. Hitler to Maus, and then to this, it feels like a massive step backwards.