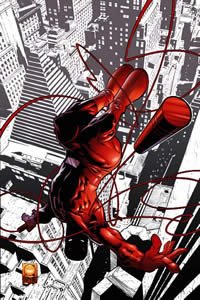 as the new ongoing writer after Kevin Smiths run must have been very hard on the then rising star Brian Michael Bendis, but he really got his hooks into the character, came up with an new-direction for the title and replaced the formulaic superhero artwork for the grim "used" artwork of Alex Maleev. Throughout his near 50 issue run, Bendis exposed Matt Murdock as Daredevil, married the characeter off, gave Bullseye the shitty movie target engraved on his head but in a way that really worked, arranged a massive internal coup that nearly killed Kingpin, had DD fight an entire ninja clan on the streets of Hells Kitchen, killed off Kingpins wife (his only stabalising influence and weakness), declared Matt the new Kingpin of NY and eventually imprisoned him. My only fear throughout the entire run was what would the replacement writer do once Bendis left?

Going onto Daredevil as the new ongoing writer after Brian Michael Bendis must have been almost impossible for Ed Brubaker.

A lesser writer would have found a loophole to pull DD out of prison, or written off the last 5 years as a dream, hoax or imaginary tale (even better, he could have shed his skin, gone into a cocoon and developed stabby wrist things). In the Marvel Universe it wouldn't be impossible for the Avengers to act as character witnesses to free DD, but then that would have rendered the entire Bendis run obsolete. Instead, Ed Brubaker has picked up the ball exactly where BMB left it and is running with it.
Only a few issues in, and we have already seen all the movers and shakers in Rikers prison attempt to kill Matt (lets face it, a good chunk of them are in there because of DD or people like him) and the death of long-term Matt confidant Foggy Nelson. An excellent supporting cast keep the story moving outside of prison with Ben Urich attempting to clear Matt's name, and the apperance of a new DD on the streets of Hells Kitchen means we also get superhero bang for our buck in this prison drama. And wait 'till you see Frank Castles reaction to the violent outbursts in Rikers Prison.

After the last few years of DD's life, he has lost everything, the inmates of Rikers are about to find out that a man with nothing to lose is truly a Man Without Fear.
Posted by Sid at 10:37 am

I should really start reading Daredevil.