I've been on holiday, tremendously busy at the shop, not updated the blog for those reasons. No Glyn for 2 weeks. Rejoice. All you customers Glyn drove away - come back into the light, I will save you.

So, reading the always interesting Rich Johnstons Lying in the Gutters column and came across the following image. 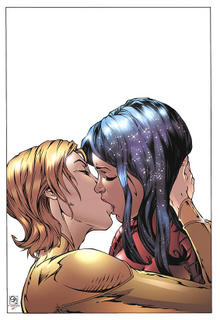 Amazing, this image is going to be considered controversial when all it is is two women kissing. In other country's they have comics about full-on sexual relationships - both hetero and homo, in the US they are sure to get in a tiz-woz about 2 women kissing, they did it on Star Trek and it offended nuff-people.
But will it be banned? 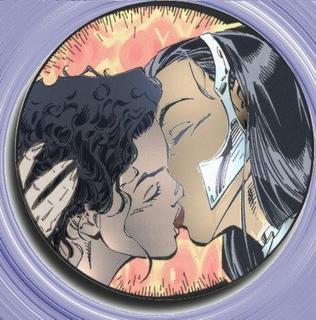 The above is taken from the then best selling Gen 13 ongoing. Issue 5 to be exact. Gen 13 was the first comic I ever had on Standing Order all those years ago (and yes, I still miss it, especially those Ellis annuals - they were ace).

The powers that be at Image (then publisher of all things Wildstorm) felt the need to change the image so as not to offend the oft-sensitive American public. Looking at the issue now, I cannot see a Comicode approval stamp anywhere on the cover so it couldn't have been done to appease them.
Anyway, it was changed to this: 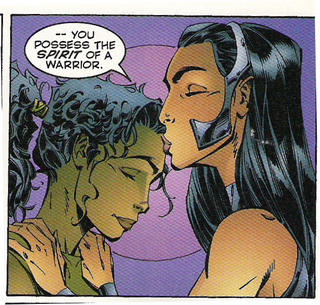 Oh, what a weird industry this is, anyway, it will be interesting to see if 10 years has made any difference to the acceptance of (shock horror!) gay imagery.
Probably not: Republicans will be offended, straight people will be threatened, gay people will think its a cheap sales tactic, and 15 year old boys will buy it.

Meanwhile, Strangers in Paradise will carry on doing clever intelligent stories about mixed / same gender relationships inside it's pages, but as its not all over the covers people won't mind.
After all, it's not like people who take offence at this type of thing think to check the content of anything. Just the packaging.

Maybe because the literacy rate is so low in the US, it's easier to just look at covers and shout your disgust at this affront to a god-fearing populace.
Posted by Sid at 1:07 pm

I don't really understand why things like this are still frowned upon so much in this day and age but you will always have people ruining something because its "evil".

People who like/accept this stuff are the true evil-doers. So, that makes you a nasty faggot, doesn't it, Pete?