A few people have expressed interest in my comic work (not publishers or anything, just peeps), and while I have no finished product to show you - and reams of script would just be dull - I have shanghaied some artwork from two of my friends whose work I really admire.

The first one is by a guy called Matt Boyce, he has been studying artwork for years both foreign and domestic and is steadily cultivating his own style, a blend of mainstream/animation/indy/european/ashleytemplewoodsmith ( a style which I like to call proto-ART-prog...bwah hah hah). 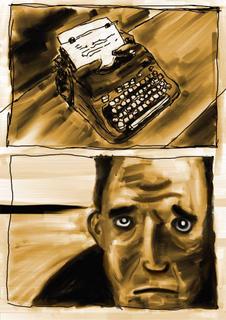 Anyway, he is a great guy and lots of fun to work with as he has crazy assed ideas.

Mat Boyces blog: I am the Monkey God I will bite your eyes!

The second artist I really like is Stuart Cattell, I think he has all the skills it takes to make it in the mainstream comic world (Marvel and DC), except the time to draw and someone paying him to do so. 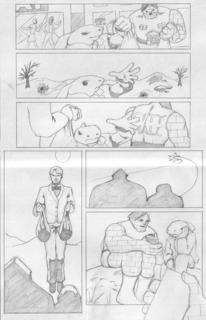 This is page 3 of a comic we created called Dates for Capes, about a Superhero dating agency, it follows our protagonist who fights crime whilst searching for a date. Its quirky, campy and doesn't take itself too seriously. This unlettered, uncoloured page highlights an oh-so-brief battle between our hero, and two villains called Loan Shark and City Hall. (I'm sure you can figure out which is which).

Stuart doesn't have any website, until he finishs drawing this issue. When he does (and not a minute before), I will get a website up and running showcasing the entire first issue of Dates For Capes, and his other artwork.
Posted by Sid at 10:13 am

I love the way Matt colours his stuff, it really stands out and you can always tell his work by the colouring.

Stuart is a great artist but the image you posted isn't one of his better pieces and doesn't really show how talented he is.

I agree, but its the piece Stuart wanted to show, his call, not mine. I think he likes it because it tells a story without speach-bubbles.
He has done better, but I think this was a sequential story-telling thing.

Well kick his arse into gear and lets have a look at the whole of this first issue.

I think Matt bOyce is a shit talking talentless arsehole, bingorah could draw better bingoRAH is mighty, bingorah wants to eat Pat Lee's kidney! and spit in the eyes of nae-sayers! bingorah wants to see the return of night thrasher in a solo comic!

This is a excellent blog. Keep it going.

This may be of interest to you I have a free online dating service. It pretty much covers dating stuff.

I'll be sure to come back.

Very nice blog, hard to come by these days,

If you have a chance, can you visit my Dating Ideas site

Not a bad site you got here mate!

Check out mine
All about
nc adult personals

Great Blog! Ilike it.I have Totally Free dating site for singlesTake a look if you have a minute. Thanks and have a good one!

Great Blog! Ilike it.I have Free dating site for singlesTake a look if you have a minute. Thanks and have a good one!

I'm impressed - you have a brilliant blog here. Here's a solution that might be of interest: Age Dating It's all there: Age Dating


online dating service <<< Meet Thousands Of Singles In Your Area >>>

Hundreds Of Happy People Across The Globe Have Been Successful In Finding Suitable Partners With Online dating. Thousand Of People Are Looking For A Date Today. They Are Looking For Someone. Are You One Of Them?