...and thing's remain largely the same.

March the 8th marked the one year anniversary of this site, which is somewhat of a milestone I guess as most blogs tend to go inactive after about two months as most people realise they didn't have as much to say as they thought they did . Personally, I have always found the best blog's to be something-centric, like this site talks about comics, FALISV talks (somewhat sporadicaly) about video games, Matt Boyce's blog revolves around his art, Tagrope about wrestling etc...
I suppose an even bigger milestone is 100 posts, that averages out at just under two a week, but I also deleted 2 or 3 which I didn't like after posting, these include the famous "Bob Geldof please fuck off" post and the famed "Valentines Day WPO shooting", both funny, but didn't serve any purpose or fit into the tone of the website. Just because I have a sick sense of humour, doesn't mean I have the right to drag you all down with me.
Speaking of which, I was in Sainsburys a few weeks ago...

So what has changed in the last year, well, our founding father and co-writer Sam Pay had left for greener pastures. Okay, maybe not greener, he was in London last I heard, and I am sure whatever he is doing he is putting his absolute all into because he is that kind of guy, whatever he turns his hand too, I am sure he will suceed.

What else? Have I had anything published? No. Have I written much? Yeah, got some great stuff down on hard-drive, not quantity but I like to think quality, I just need time to develop these ideas. I have taken a break from writing to read a shed-load of theory books and study the structure of writing more, I am currently annotating "Story" and will go onto "hero with a thousand Faces" next, which is all about cultural ideology and shared consciousness.
The shop is doing well, as is I think the entire comic industry. Every year both seem to do slightly better, with some absolutely cracking reads being released last year. And with the advent of Superman and X-Men 3 movies, things can only get better (note to self, never, ever quote D:REAM again).

So I guess I better write something of interest otherwise the 100th post will be about absolutely nothing. 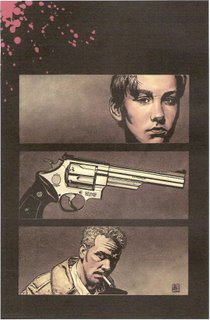 Cool as fuck, this means I have uploaded the entire story and the cover to the much-lamented missing issue of "Hellblazer", print it out, distribute it for free, remind people what Constantine can be when he gets the chance. This issue got banned becasue they (DC / Warner Bros.) didn't want it to piss people off, thing is,
most thing's worth saying usually do.
I know I whinge about Hellblazer being broken, and I probably will until Ellis goes back to it.

Speaking of free-speach, the "V for Vendetta" movie launchs today, I will check it out tonight and let you all know what its like (in my humble opinion) as soon as possible. Just remember, despite what they say in the film, it's set in Thatchers Britain.

just a quick note to apologise for my spelling in todays entry, I am having contact lense problems and can barely see out of my left eye so it hurts to look at the screen, I have my head down and I am just typing. Let the fates fall where they may.

DMZ is fucking excellent, I didn't want to read it issue by issue, so I waited until I had the first 5 issues so I could read a whole chunk at once. As usual, Brian Wood has me hooked with a great concept and lots of off-beat ideas, lots of fun and as with a lot of media products these days, it is very much anti-bush regime but without saying it, kind of like the Ultimates series from Marvel.
I am not completely sold on the artist, although there is a great level of detail in the art and some amazing grafity ideas (most of which I would hazard a guess as saying were Wood's idea), he often fails to draw your eye to the key part of the panel and I am left with an in-distinct idea of what the lead character looks like.

This really needs an entire post sometime next week, but DC continue to entertain me week in and week out, being a true Marvelite, I never thought I would be behind DC like I am now.
The internet "fans" piss and moan about DC and johns, but they so wanted this massive "Infinite Crisis" crossover, I think they just like having something to moan about. Cunts.

Yeah, pretty good movie all in all. It's a ronseal movie because it pretty much does what it say's it will on the can: Ultimate Avengers. Not quite "The Ultimates", but not just "The Avengers". It follows the plot of the first Ultimates series fairly closely, combining the Skrull story with that of the Hulk rampage, but don't expect to see Hulk eat anyone, try to kill Freddie Prince Jr. or fuck Betty Ross. worse than that, they've gotten rid of Thor's beard!!! Bastards.
The extras are pretty good, you can select an option so that fun facts pop up on the screen, such as "in the comic book, this sceen led to actual domestic violence", fun for all the family.
All in all though, lots of fun and worth checking out, especially with a sequal on the way.

Congrats on your 100th post. Sorry your contact lens hurts. Still, you win some, you lose some.

Congrats on your 100th post, and your 1 year anniversary. I'm still reading and checking your blog every day which means you must be doing something right. Keep it up; I'm still expecting to be reading this next year.

To my ever growing pull list and interest in the medium, lots of which have come from your recommendations.