Are we a Slave to Format?

Format. It's all important to a comic. Should it be a two parter, six-issue mini, self contained one-shot, ongoing, finite or original graphic novel? It's nice to see that the powers that be at Marvel and DC have remembered that format is a choice, because for a while there, everything was getting a little convoluted as people "deconstructed" the story for the sake of a six issue story-line that fitted nicely into a Tpb format, and therefore a bookstore.

Avoiding the obvious like Fell and Local, more and more comics are seeing the occasional self-contained story, or as they used to be known; "filler" issue. These days, filler issues do more than fill space before the next big crossover, in a lot of cases, they are being used to further characterisation and story-line in a calm before the storm kind of way, like the recent Teen Titans annual.
Interestingly, more and more comic one-shots have been released lately, almost harkening back to the days of fifth week events (back in the day, comics shipped on a tighter monthly schedule, and in months with 5 Wednesdays, we used to see DC or Marvel offer a fifth week event to make up for the lack of core Superman or Batman titles. More often than not these so-called events were anything but). Titles like the "I Heart Marvel" range and the "What If" line-up.
Strangely though, I know a lot of people whom wait for single issues to be collected in Tpb format, such as the much lamented "Demo" or the Ellis Apparet collection.
Titles such as Infinite Crisis or Identity Crisis may well be written with the Tpb format in mind eventually, but neither do so at the expense of the single issue. Both are written with the cliff-hanger format in mind and offer a satisfying read in one issue, but as something that fits into a bigger picture. Lets face it, would the shock end to American Virgin have been half as good if there were another 5 issues ready to read straight away? Sometimes, the necessary 4 week wait between titles gives you time to think "Fucking hell, I wonder what's going to happen in the next issue?".

Sometimes though, that four week wait can generate into "What happened in the last issue, my god, it's too insipid to remember. I'm sure Wolverine said he was the best he is and what he did, but who was he speaking to, and why?". Especially, I find, when dealing with marvel miniseries. A lot of the time, they don't tie directly into any of the ongoing series, and in the case of something like "X-Men Phoenix Endsong", you really are better off waiting for the Tpb. . Even a title as good as Runaways reads better in six issue chunks than it does as single issues, and my theory on that is this: When you see Batman on a page you have a certain notion of how the character is going to act, but in a layered book like Runaways, the characters grow and evolve issue by issue, mainly because the characters are characters and not characterisations, because they are not as important as Icons like Superman, they free the writer more, enabling him to take more chances as the characters find their own voices. In a comic like this, the choices affect the narrative and the narrative affects the choices, the status quo is a lot more fragile and therefore is harder to access, so reading in complete chunks of issues helps keep you in pace with the story.
Of course, that's not to say that Runaways is better than Batman or vice-versa, they are just juxtapositions of the super-hero anatomy.
Recent Ellis comics, such as Desolation Jones, really haven't lent themselves well to the single issue format. The series is great, but out of all his work I have read (which is nearly everything), this series lends itself to the Tpb format more than any. 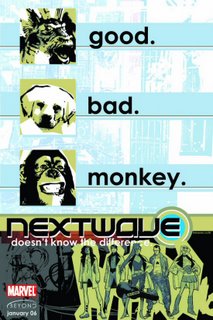 Nextwave is an interesting one, seeming to deal in two issue story-arcs. I had a good friend who irrationally hated two-parters in comics, but for the most part I think they are worthwhile. Especially when you are dealing with essentially fun, irreverent, throwaway story-lines such as in Nextwave or the two-part Ultimate Spider-man story "Jump the Shark" - a story in which Spider-man and Wolverine swapped bodies for a day, it may sound kooky, but it didn't take 6 issues to tell, was a hell of a lot of fun, and no-one died for an entire story, which is a Bendis first.

Of course, the most popular format in comics is, has always been, but might not always be, the soap-opera.
Whether its a newer title like Walking Dead or an older title like Spider-man of the Fantastic Four, they are undoubtedly the soap-opera format. Same core week-in, week-out, familiar surroundings (Metropolis, Gotham, New York, Rovers Return), revolving supporting characters (Aztek in JLA, Betty Brant in Spidey) a continual narrative dating back forty years for Marvel, 20 years for DC (using the original Crisis as a restart point), featuring multiple story-threads.
There was a saying a group of friends and I had about X-Men, they never finish a story without starting a new one. The sure-fire mark of a soap-opera. But as more and more people come into the Tpb format looking for a quick hit, will this trend continue, or will it fizzle out to be replaced by complete reads such as Preacher or V for Vendetta?

The anthology series has seen more success lately, like the award winning "Flight" from Image Comics, which has sold far more in bookstores than it has in comic stores, or the "Rising Stars of Manga" range from Tokyopop. The problem with anthologies has always been the sheer disparity in the quality of the work, this is the reason why titles like negative Burn weren't as successful as they deserved to be, for every Bendis or Jenkins script, you had some real crap.

An interesting, and much more recent format has arisen: the "complete". As more and more people have gone capitalist completist crazy with series box-sets on DVD, the same thing has started to happen with comics.
The Complete Bone has reportable sold over 50,000 copies, with all fifty-five issues 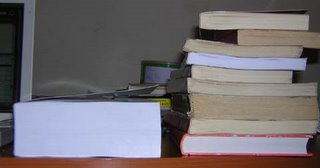 in one volume for the bargain price of £27 (pictured to the right, versus the original Tpb collection). Bone - the little indie-press book that could - has sold nearly a million Tpb copies in total with its various printings including its full-color Schoolastics printings. What Spider-Man Tpb can claim to have sold that many? Maybe Ultimate Spider-Man Vol. 1. Do you think the Alias Omnibus will shift these numbers at £45 for 29 issues?
And who can forget the massive "Complete Calvin and Hobbes", an odyssey in comic panel storytelling for £85, every C+H strip ever.

As with most things in the comic industry, there is no perfect answer. In a lot of cases, story dictates format, but with a few products the format has come first and the story comes later. The important thing though is the choice, and the fact that there are all these different formats to play with, and even more that no-one is using: the widescreen format, the vertical format, not to mention the every growing in popularity mini-comic.
Format is a tool, not the end product, and like all tools for creativity, they need to be played with. I like to think there is a new format out there waiting to be discovered that no-one has even thought of yet, which may even revolutionise comic-books. If there is, the depressing thing is: if people couldn't bag, board it and file it away with the rest of their collection, would anyone even care?
Posted by Sid at 2:00 pm