The Best He Is At What He Does?

Wolverines been a busy boy. Not only is he star of all the core X-books (last time I checked anyway, I havn't read X-Men and Uncanny for two/three years, but I do own them) and New Avengers, he now has two ongoing solo titles. The long running Wolverine and the newly released Wolverine: Origins.

It has been much lamented that the greatest thing about Marvel characters is that they are all flawed in some way, even the most altruistic of beings have a weakness or imperfection. Iron Man is a recovering alchoholic. The most powerful mutant in the world, Professor Xavier, is wheelchair-bound. Captian America is a man out of his time. Spider-man can never go back and erase the one mistake that cost him his Uncle.
This formula has proven most effective in the forty-five years Marvel since the dawn of the Silver Age of comics, out of the thousands of characters created since Stan Lee passed the torch to other creators, the only new creations who have really caught the publics attention have been flawed characters such as Gambit and Wolverine, Wolverine with his dark hidden past and berserker rage and Gambit with his, er, dark hidden past.
Its a formula that other creators have picked up on, such as Todd McFarlanes Spawn whose protagonist was so flawed he ended up in hell; where he sold his soul. Even iconic characters such as Supes and Batman have benefitted from this flawed formula, with Superman being ret-conned as a somewhat naive character at times and Batman being, well; a dick. 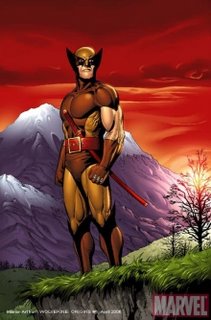 So it was with much trepidation that I awaited the first issue of Wolverine Origins (out now, with two covers, incuding one by Michael Turner - the most over-rated artist in comic). Daniel Way and Steve Dillon are a creative team that have really caught my eye lately, I have of course been a Steve Dillon fan dating back years to Hellblazer and the essential epic Preacher, liking his work so much that I have even bought two issues of WildCATs with his name on. Daniel Way I find to be somewhat hit and miss, but he knows how to write for his artists and as such, on all the collaborations with Dillon (Bullseye, Punisher Vs Bullseye) he has created brilliant moments for Steve Dillons art to shine. Catching the little minutae of details in facial expressions is Mr Dillons strong points, as he has one of the most versatile arrays of expressions of any artist I can think of (tied with Gary Frank).
So what could have put me off Wolverine Origins?
The thing that makes Wolverine work for me is that he has the dark past shrouded in mystery. Fuck the claws, ciagarettes and bad-boy attitude, it's dated and fucking stupid. Wolvie is a nomadic soul, wandering from place to place growing and evolving as he goes, making mistakes and learning from them - which has always been at odd's with the amount of team books he features in, but by giving him a family in the X-Men it has helped the character grow. Besides which - as the movie will attest to - Wolverine makes money.
So my thing is, if you erase the mystery surrounding his past, you'll lose a lot of his mistique (not the blue skinned shape-shifter). It would be like bringing Uncle Ben back, or Cap buying an I-pod or Superboy Prime punching on the walls of reality until Tony Stark's alchoholism was completely erased. The six issue Origin series was brilliantly crafted (by Paul Jenkins) as it added to the character, building another layer of intrigue to his past, but without the character having to confront his old demons. We know his origin, but he doesn't, so the character remains the same at the core, yet somehow more interesting.
However, with this new story-arc and the aftermath of "House of M", Wolverine knows everything. EVERYTHING. And we don't. But we can for £2.20 a month. This is the complete opposite of Origin and in my opinion is detrimental to Wolverine.

Wolverine Origins is a fairly fun book, like I said, it's got Dillon drawing it so I'm sold. However, I found his art lacking for the first time ever in this book, though the face detail and expressions on "Dum-Dum" Duggan and the SHIELD agents was brilliant, it could have been anyone in the Wolverine costume. He looked neither short, nor feral. After the good fun titles that Way and Dillon ahev put out before I was also expecting the book to be funnier, not slapstick and still serious, but with the occasional funny moment, but for the most part the book was flacid and insipid.
Wolverine is one of Marvels top-tier characters and a lot of eyes are going to be looking at the launch figures, as this is Marvels big book launch this month and so the pressure is really on for Way and Dillon, hopefully the title will pick up in a few months and find a stable selling ground which isn't inflated with variant cover gimmicks. 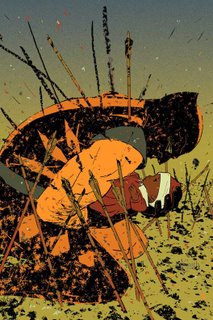 So what happens with the regular Wolverine title? Well, starting with Volume 2 #42 (#231 for numeric puritans like myself), the new creative team of Mark Guggenheim and Humberto Ramos debut.
I absolutely love Humberto Ramos, he is one of about only five artists that will actually inspire me to pick up a comic. Over the last few years his work has evolved more and more to the point where his work is more cartoony that main stream superhero art usually allows, but I love it to bits. From his early guest spot on Superboy, his run on Impulse, his self-published Cliffhanger title Crimson, through Spider-man and his more recent Revelations I have read it all and will quite happily follow him onto Wolverine.
Mark Guggenheim is a relative new-comer to comics, according to a quick google, he started out as an intern at Marvel before studying to be an attorney and writing for television, his first comics work was a fill-in stint on DC's Aquaman, he is a long-term comic fan contracted to stay with Wolverine for the 7 issue duration of Civil War, so it's quite a high profile first project gig.

But before we get to that, we have nexts weeks shipping Wolverine #41, a double sized fill-in issue which thankfully isn't double the price, a book which I just finished reading which prompted me to write this column.
Wow. Just wow.
This is what I want my Wolverine to be like. No Sabretooth this issue, no cigar's, no "Patch", no cussing, no whining about his lost past, no mention of dead ex-grilfriends (he is worse than Kyle Rayner on that front) and it doesn't matter what costume he is in. This is just Wolverine doing a job as a favour to a friend.
Now don't get me wrong, I like all the things I mentioned above, but the last few years they have overshadowed the rest of the character, the little bits of charecterisation that make Logan / James / Wolverine unique. His code of honour.
Most people forget how much time Wolverine spent travelling around the world, training as a Samurai. Logan is certainly not a man without morals, albeit a slightly twisted eye-for-an-eye sense of morals. This is the side of Wolverine that is seldom seen these days (if David Hayter and Bryan Singer don't show it, why should anyone else?) and made for a welcome change in this issue.
I feel like I should say what happens in this issue, but seeing the plot unfold is part of the joy of reading this issue by Stuart Morre and C P Smith, so I am going to resist the urge to gush and spill the beans. All I will say is, it was nice to see Wolverine fight down the berserker rage rather than welcoming it, and having an inner monlogue that wasn't just meaningless cliche.
This issue has reminded me why Wolverine is still a relevant character in modern fables despite all the shit surrounding his very convoluted origins. Wolverine is the best there is at what he does, and what he does isn't black and white.
Posted by Sid at 7:09 pm

FYI, Wolverine is only on the Astonishing X-Men team, not the others.

Oh good, his is still the most overexposed character in the history of comics though, beating even Batman and Spider-man.