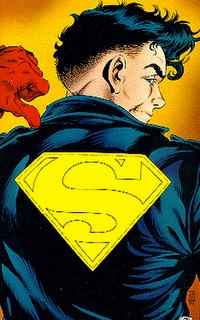 On a recent column, Erik Larsen discussed why the character Nova was so important to him: it was the one character that felt like his. Superman, Batman, Spider-man and the Fantastic Four had all been established super heroes by the time a young Erik larsen found his way into comic stores, but Nova was new to his generation and he was in at entry level for better of for worse. This is how I feel about Superboy and the Teen Titans.

I started reading comics more recent than most people think: 1996.
Don't get me wrong, growing up I had always read the UK Transformers comic, and being British, every now and then I recieved a Superman or Fantastic Four annual for Christmas. I had borrowed from my brothers friend "Batman: A Death in the Family" and sat and read the entire "Death of Superman" Tpb in WH Smiths, and even though I didn't keep up with DC or fully understand the "shared universe" concept, I knew these two books were important.
But it was only when a small comic shop opened in my home town and I went in looking for Star Wars figures and I reached disposable income age that I really found out what comics really were.

At the time I found the comic store, my parents had just gone through a massive, incredibly nasty and not at all amicable divorce which left my Mother, Brother and I penniless and I had to start working on top of GCSE's just to help my mother pay the mortgage, which then after reposesion became rent money. So the spare bit of money I had was very important to me.
In fact, friends dating back to that time can still recollect my enviable wish of: "If I won the lottery, I'd put Spider-man on standing order", a wish which bought a wry smile to my face this week when a fairly new comic customer said the same thing about buying graphic novels.
Through that comic shop I found a lot of friends, many of whom I still know now and indeed, it is the very shop that I work now and can call, at least in part, mine.

One of the first comics I was put onto was Superboy, my friend Pete loved the character and indeed all things Superman related, but we both got caught up in the hype of things like Age of Apocalypse, Maximum Clonage and Gen 13 (which I still love, so shut up) and Superboy initally had to wait in the wake of massive crossovers and variant covers (the past is the present is the past).
Still, eventually I got into the adventures of Superboy, Impulse and Robin. Superman, Batman, Flash, Wonder Woman and all the big DC players held little interest to me as I was after all a Marvellite through and through, but the three minor players with their recent launches and issue #1's seemed a whole lot more accessable.
Unfortunately, I had got into comics in one of the bleakest periods of comic history. Marvel had filed for chapter 11 bankruptcy and comic shops and companys were closing down left right and center; a few times it seemed like the comic shop I frequented would follow the fate of so many others, and many new Marvel characters never got of the ground, facing poor sales and cancellation . But DC, subsidised by their parent company Warner Bros. kept newer titles like Superboy afloat.

Superboy was ace in the early days, a clone of Superman with substituted powers to emulate the Man of Steels ability, such as tactile telekenesis. Karl Kesel and Tom Grummett handled the character, with a couple of fill-in issues by Humberto Ramos which led to me buying the Impulse title. The entire storyline with Superboy and Knockouts relationship was brilliantly handled, and was a portent of things to come for the choices Superboy would later have to make in Teen Titans.
For a time, Superboy even had a spin-off title, the ill-fated "Superboy and the Ravers", things seemed bright for the kid of Steel, and I still remember the wave of excitement I felt when DC announced "Young Justice", an ongoing team-up book starring S'Boy, Robin and Impulse.

As I grew up, comics grew up with me. My comic hobby became my job and I started reading more and more comics, for a comic sales clerk is only as good as his recomendations, and eventually Superboy fell to the wayside. Robin had started to grow up, taking responsibility and becoming a natural leader. Impulse had a few times hinted to greater things and maturity. But Superboy just seemed to limp from one set of creators to another never growing or evolving. True, he always had to battle with the fact he was living in the greatest shadow ever cast in the DCU, which anyone with an older sibling can tell you is not an easy thing to have to do, and it seemed obvious to anyone that Superboy would never go anywhere as long as Superman was around, and let's face it DC are never going to rid themselves of such an icon.
The character had lost all direction, the fun-loving-sun-drenched-Calafornia-mallrat-generation x- surfer-image had reached its limits, dying a death along with Pauly Shore and Superboy was "re-invented" many times, as a modern day Kamandi, then he lost his powers, eventually becoming a tenement building super-intendant and - unless you are Will Eisner - it's not easy to tell tenement building stories.
Superboy was cancelled unsurprisingly at issue 100, and faded into brief obscurity after the cancellation of Young Justice.

Gone, but not forgotten.

Marvels market dominance, after their financial and creative post-bankruptcy reshuffle, had established them as major players and each and every month, DC watched as Marvels unit and dollar ahare increased. Out there in comicbook fandom world we had no idea, but the wheels at DC started to turn again.

With the combined forces of Judd Winnick and Geoff Johns, the DCU had a massive shake up, re-creating Young Justice as The (new-new-new) Teen Titans.
Superboy was back, and this time, he had a purpose. He struggled with his heritage after finding out his DNA was part Superman and Luthor, and he started to ignore his friends and deny his heroism. 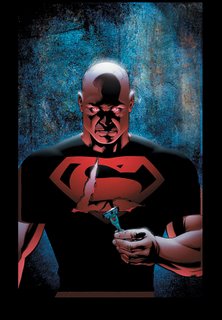 I have always said that the greatest comic characters are those who are flawed, as any story in about conflict, resolution and the choices the characters make along the way. If any character is too pure or altruistic, the suspense and choice is diminished, that's why Batman and Spider-man are the two greatest known heroes in the world, they both are inherantly flawed (Bat's is an oedopeidic nut-ball whose childhood was ripped from him, and Spider-man can never atone for that one mistake).

The perfect clone that was Superboy, was now flawed. And thus, became a character, not just a characterisation.

Now if you have not read the Geoff Johns Teen Titans run, you really have no excuse, they are all available in Tpb (dirt cheap too). EVERYONE who reads Infinite Crisis should read these titles, and after the events of Infinite Crisis #6, we all know what choices Superboy made.

Superboy is dead, and has done more in his death than most comic characters have in their entire 40-60 year heritage. Be thankful for characters that are more than just profit making icons.
Posted by Sid at 7:19 pm

You just get back to handing out free Moon Knight LEGO figures May 6, you Mr Large-Blog-Poster you, y'hear???

Very nice! I found a place where you can
make some nice extra cash secret shopping. Just go to the site below
and put in your zip to see what's available in your area.
I made over $900 last month having fun!
make extra money