A Tale of One Good Comic

I'll never know why Beatrix Potter, Roger Hargreaves and Raymond Briggs are considered to be excellent childrens story-tellers whilst the rest of the comic book medium gets written off as a low-brow form of illiterate story-telling by the mass media.
Indeed, the parables and cautionary tales of titles such as "When the Wind Blows" are just as relevant to adults as they are to children, yet by being listed as childrens books in librarys they are often shunned by the elder reader. 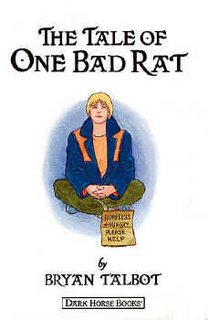 When Will Eisner coined the phrase "Graphic Novel", few realised what an important name it was, as it describes itself to a wide audience, free of ageist stigma or even class snobbism of "comic-books" being for the uneducated.
There is some argument as to what defines the term "graphic novel", too many; it is any comic with a spine, to most; it is any comic presented for the first time in its original format as a complete collection (such as the ground-breaking "A Contract With God"). To me, a graphic novel can be anything that feels like it is a complete story, novel or novella presented as one volume. Maus is a graphic novel. The Dark Knight Returns is a graphic novel. Watchmen is a graphic novel. Ultimate Spider-man volume 7 is a Trade Paperback.
Then there are phonebooks like Cerebus, buts that's a different column altogether.

This column is about the amazing graphic novel: Tale of One Bad Rat by Brian Talbot.
Despite being printed originally as a mini-series, it is undoubtably a comic meant for GN. I would like to guess that every School and Library would have a copy of this book in stock, but alas, I doubt that to be true.
Although this book came out around the same time I was getting into comics, I only recently got around to reading it after Glyn put me onto it (see, he has some good points) - although I have no idea if he has read it or just read about it in the pages of Comics International.

This book deals with the subject of child abuse, and the effects it has on the victims. Incredibly heavily researched, Brian Talbot read as many books as he could find on the subject matter and talked to many victims, and the one thing that was parralelled in all accounts was that the victim feels like they are the ones in the wrong.
Coupled together with the protagonists journey retracing the steps of Beatrix Potter throughout the Lake District, it makes for a compelling read, with many clever touches and symbolism spread throughout this beautifully crafted graphic novel.
Posted by Sid at 10:18 am

Any copies in the shop? And for how much?

Its on re-order, I think its around the £12-14 mark.
Its kind of a lottery as to whether or not it comes back in, as I cannot find an order code for it anywhere. Give me a few weeks and I will see what I can do.