You know what you never hear people talking about? How shit the Superman / Batman team-up title is.
It is though. The reason people don't mention it is because it sells so well. I might be hurting my pocket here because its one of our biggest DC sellers, but you know what? It needs to be said.
Lets look at the facts. (I say facts, these are from memory so don't quote me) 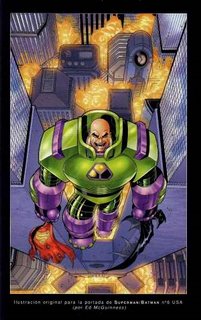 The best run on the title. Superman and Batman team up in the first of 25 tiring dual-monologue issues to fight the combined evils of Kingdom Come Superman (albeit for altruistic purposes) and a mad, bad Luthor. Nothing much really happens for a six issue story except pointless exposition, but the striking bold art from Ed McGuiness, and the fact that he's finally doing a monthly title again keeps people from noticing the lacklustre story contained within as people are too busy grinning like fools at Batman's swirly elbows. After all, people have been waiting AGES to see E=MC2 draw Batman after his appearances in the Emporer Joker storyline, another pointless and shit "is it elseworlds or not" story written by Jeph Loeb that people mistakenly confused for a good story due to the pretty pretty art and the fact that Joker was in it.
The story ends with a crazed Luthor announcing a crisis is coming. A great cliffhanger, but is this our Lex, or is it Alexander? Hang on, which one has what colour eyes? I've got confused. Still, nice battle suit Luthor, haven't seen that since...oh, the last Crisis.

Issue 7
Fun romp with the late Superboy and Robin as they battle against the evil forces of Pat Lee's poor artwork.

Issue 8 -13
Another in a long line of Jeph Loeb "I miss the silver age" ret-con. Supergirl returns, the original; Kara. she is from Krypton, from Argo city, related to Superman, just like the dead pre-crisis one. The story limps from a to b with shitty Michael Turner artwork and cover, as Supergirl struggles with her dark side and its revealed that she is somehow more powerful than Superman. Then Darkseid kills her, then brings her back. Superman is possessive, Batman disagrees with his handling of the sit 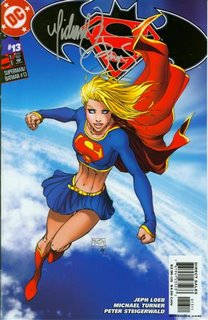 uation, Wonder Woman shows up and takes her to an island full of lesbians, who all appreciate her mini-skirt just as much as anyone else but are less likely to date-rape a (pre-legal) teen.
And just having the words pre-legal teen in a sentence will do wonders with my sites search engine ratings.
Along the way, Jeph Loeb reintroduced another un-missed silver age facet of Superman lore: multiple colour Kryptonite with there own effects on Supes. great.

Issues 14 - 19
Another great artist wasted on a piss poor story. Carlos Pacheco struggles to tell the convoluted story of another dimensions superman and Batman, who kill people for fun. You know what? this story line made no sense to me at the time and I know if I reread it, it wouldn't be any clearer to me, so I am just going to skip the entire thing and focus on the fact that a) it's 4 am, b) I should be asleep, c) I probably won't sleep, I'll probably just read some comics instead and d) when it gets this late I forget how to use capitals.
To summarise, nice art. What story?

Issues 20 - 25
Wtf? Why are the Ultimates in this? Is this supposed to be funny?
The idea of any comic using an alternate world equivalent of the JLA or Avengers is so overused, and just doing another world version of the Ultimates is THE SAME FUCKING THING. Learn a new trick.
The story is so pointless, it actually makes the art quite forgettable.
I think Myxlzptlk is in it, and it references Emporer Joker, an unsubtle nod that only really meant anything to Jeph Loeb.
Is this a way to end your career at a company or what? And frankly, it doesn't bode well for the Ultimates 3 series, if the first story he used those characters in was a shitty story for a different company.
Maybe I'm wrong? did anyone get anything from the first 25 issues of this series?

Issues 26
Pretty decent single issue to be fair. It's a hard one for anyone to slate because it's in memory of Sam Loeb, Jeph's son who died of cancer far too young. It touched nicely on the Superboy / Robin dynamic which was nice to see, as it almost got lost in the shuffle of Crisis and OYL.
A veritable smorgasbord of artists save this book from its original plan of using Pat Lee for the entire thing. Thank god that didn't happen.

So, I've done something different here. I try not to just openly slate anything without putting a positive spin on things (except spider-man The Other, but fuck them, they did that to themselves), as I really hate to be another negative comic fan.
As tempting as it is to leave this as a hate filled rant, here comes the positive spin.

Issue #27 shipped today, with the new creative team of Mark Verheiden and Kevin Maguire. Maguire is a competent artist when given half a chance (despite having to redraw one Wizard cover like, 13 times) and I think all he needs is a book to really showcase his work. Mark Verheiden came from nowhere (okay, a little place called Hollywood where he worked on Smallville) to do a small, and excellent run on thepre-Johns/Busiek relaunch Superman.
Their work on Supes / Batman could be brilliant, but I've spent so long typing I'm too tired to read now, we'll have to see tomorrow.
Posted by Sid at 2:50 am