To Afghanistan and Back by Ted Rall

I’m just over half way through this book, interesting stuff. Like many people, he too suspected that the "war" was more about the price of oil than stopping terrorists, and he had his doubts about the "pinpoint accuracy" of American bombs So the award winning reporter and cartoonist decided to fly over to Afghanistan at the start of the US bombing to see what life was really like over there.

Informative and cynical, let at the same time there is a sense of the author distancing himself from the whole situation despite the fact that he lived through the harrowing tale. He approaches the material with an unbiased view of affairs, never latching on to the current trend for anti-American sentiment but never blindly touting patriotism. He reports on the facts as and how they come to him, never dwelling on finding the altruistic holy grail of journalism: the urban myth that is the "truth". 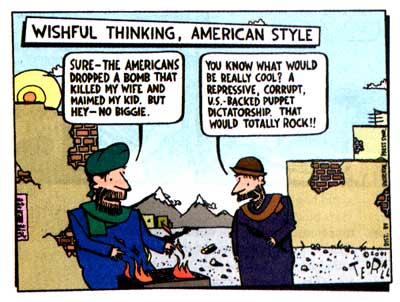 The interesting thing about this book is its format. It literally is a blend of graphic novella and factual reporting. Its also an incredibly hard book to display. What section of the shop does it go in? It’s easy for me as I store it in the independent comics section, but lets face it most comic stores are going to be more interested in Wonder Woman relaunchs than this comic, so for the most part this is going to do better in the bookstores than speciality stores. I wonder: will it be displayed in the War section, the News Section, the Comic section? If its anything like my local library it will be in the kids section because its "Full of cartoons".
Its hardly current affairs anymore, as this book was first printed in 2002, but it is still an interesting look at the effect that the US’s oil war had on the people that live with the unimaginable every day, where the line between ally and Taliban can be blurred with little more than a pay check or a bribe.

There is little in this book that hasn’t been said elsewhere, on the Internet or other non-biased news sources, but what this book does with the facts it does well, confirming suspicions and fears about the US war machine. The underlying point of this book isn’t that any one side is right or wrong, but that at the end of the day, it’s all so pointless. 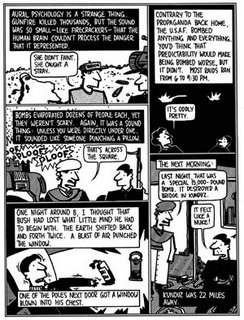 Available in all good bookstores and up-their-own-arse elitist comic shops like mine for $10.
Posted by Sid at 12:17 pm

Hey! Very Nice! Check out this website I found where you can make extra cash.
It's not available everywhere, so go to the site and put
in your zipcode to see if you can find something. I found something and make
and extra $900 a month!