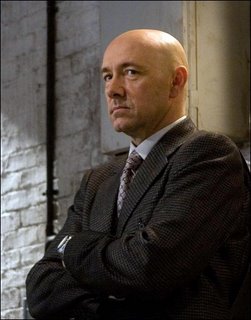 Early reviews are coming in already on the comic websites, and according to one review over at Newsarama, its not going to be one for comic purists.

"Bottom line, if you love the first two Superman movies and like the idea of a tribute to those movies with new actors, go see Superman Returns, you'll love it. Otherwise, Superman fans beware - put a DVD of the animated series in and wait for the fuss to pass."

The article gives away minor details but holds off on the BIG spoiler. Time magazine - owned by Timer Warner who also own DC and the inclusive rights to all characters within - were not so generous with the BIG one. And neither am I. The following text needs to be highlighted to be read.

No big secret really, if you really wanted to know I'm sure you could have read the novel (available for two weeks or so now) or the forthcoming comic adaption (available in the UK before the film release in mid-July). Having said that I'm sure it'll be all over the 'net soon anyway.

Either way, expect Son of Superman to remain in print for the foreseeable.

However, with these things, the proof will be in the pudding. Until I see the movie, I reserve judgement. But the important question to ask is: how will the BIG spoiler affect the comic? Wolverines Origin was revealed because Marvel were scared that if they didn't do it, the movie franchise would. Spider-man was married off in a knee-jerk reaction to the newspaper strip version of Peter Parker getting married.

Lets hope that DC remembers what works in one medium doesn't work in all mediums.
Posted by Sid at 10:07 am