This is Sid being ill Day #9. It doesn't get better, it gets worse. Still, to celebrate hitting ill double digits, I actually have an NHS GP appointment tomorrow (and who said the system was failing?!?).

However, never being one to let a bad situation get me down too much, I have used this time off work as an excuse to catch up on my reading and viewing somewhat. 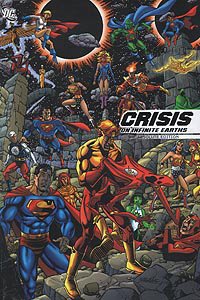 I first tried to read this book about 7 or 8 years ago, when lot's of people heralded it as a classic but couldn't tell me why. Sure it was a big crossover and it streamlined continuity, but now that continuity had been streamlined why would I want to go back and read a book with 700 characters who were about to become obsolete? Surely I was better of with Brynes "Man of Steel" and Millers "Batman: Year One"? Surely the mainly prose History of the DCU would suffice if I craved the information?
Fast-forward to todays comic book marketplace where DC is leading the way in superhero fiction (as opposed to what exactly?), where the majority of the last three years worth of stories - although self-contained - have all been building to the current, and most excellent, Infinte Crisis.
If you really want to get the most out of Infinite Crisis, it really does help to go back and read the original Crisis. And if you want to get the best out of the original Crisis, it really does help to read the current Crisis. The two work so well off of each other, for instance: If I had just read the original Crisis, I wouldn't have a clue who Pyscho Pirate is or what he is doing there. If I just read the current storyline (see the upcoming Powergirl Tpb), I get a hint that Pyscho Pirate ties into something bigger than this but I don't know why. But when you read both, even in the wrong order (and I read Crisis inbetween issues 4 and 5 of Infinite Crisis, you can't get much more arse about face than that), it really helps to bring the story arcs together.
And with the excellent back up material (a bit like the special features on a 2 Disc DVD set), this Absolute Edition looks heavily behind the scenes into the making of Crisis. An excellent purchase. 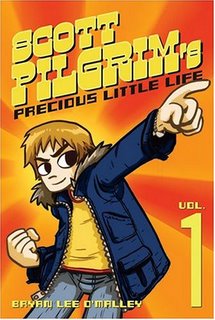 I have heard nothing but good things about this book all over the internet, and I have always enjoyed offerings from Oni Press, but it took Stephen Holland from Page 45 telling me in what quantities he sold the book (a lot) to make me actually move it higher up my to-read pile.
I can certainly see the appeal here, it is a good fun book, attractively put together in an easy to transport, fits in the pocket format not all to disimilar from most Manga digests. The page count is high for what is a £8 book, you definately feel like you are getting a lot of story for your money (the whole "bang in relation to buck" theorum).
The book starts out simple enough, with Scott Pilgrim as your average everyday 23 year old prot*. All he wants to do is hang out with his mates, play his guitar and date his high-school girlfriend. Everything is going well until a girl called Ramona skates into his life. The usual trials and tribulations occur until towards the end of the book, when her evil ex-boyfriend shows up and threatens to fight Scott, but this isn't a bottle of Newcastle Brown over the head type fight, this is Space Channel 5 meets Parappa the Rapper, with the odd Street Fighter 2 special move thrown in for good measure and an impressive 64 hit combo.
The future of the series is then laid out for us, if Scott wants to continue dating Ramona, he will have to over time, fight all seven of her evil ex-boyfriends.
If you're over thirty-five, you might be hard pushed to understand some of the subtler references which are deeply mired in pop-culture, but even then you should still get a kick out of this book. A whole lot of fun for the MP3 generation from creator Bryan Lee O'Malley.

The most impressive thing for me isn't the price (£85 for every C+H ever), the weight of the item (bloody heavy) or even the contents (see above), but reading the discourse at the front by creator Bill Watterson explaining how he almost walked away from Calvin and Hobbes just as it was starting to get popular because he didn't want to cheapen the strip by licensing the characters to plush toys and underpants. Thats a level of integrity practically unheard of by most creators, especially with a character as potentially marketable as Hobbes. The other interesting thing is hearing about his reasons for quiting the strip after only ten years; so as not to water down the end product. A level of reasoning that one wishes the Wachowski Bros., George Lucas, Chris Claremont and The Simpsns crew had thought about.
I know a lot of people don't see the association with comic-strips and comic-books, but as far as I am concerned they are all as valid as each other. I think Asterix, Tin-Tin, Garfield, Dilbert, Blankets, Soulwind, Superman and Spider-man all deserve to be represented, and respected as strongly as each other.

From Image Comics, a re-invention of the Marvel Invaders series, but with bitter real-world politics and relationships. The superhero team are drawn together and we see them go on one mission which is a failure before the group start to fall apart. Great characterisation carry this somewhat substandard retelling through to its dark ending.
This book is worth every penny just to see Proud American beat the shit out of the Defender of Liberty. All in all its very good fun, but it doesn't really do asnything you havn't seen done before, an average story with some good moments.


That's enough from me for now, I am forgetting how to type and need medicine.
Posted by Sid at 2:41 pm

hey sid, hope you're feeling better!
i got 'moms cancer' ~ and was really impressed! to complete the circle of irony my mum has stolen it to read now... *sigh* all is as stupid as it should be.
i was in the shop today watching glyn get annoyed at how you'd stick a pritt stick to the ceiling, and watching him stand on a chair and knock it down... with a light saber. (^___^) i love it. wish i'd had a camera with me, though... ahh well. i'm off to clean out the rubbish in my room so i can do some depressingly worthless seeming uni work now..ack.
>_<

So the pritt sticks' gone? Ahh well i'm certain in a few days it will mysteriously appear back up there again. Hope you feel better soon anyway, i'm sure Glyn will not be able to find some of the stuff i want on friday, but isn't that always the case?
i've already cleaned out the rubbish in my room so im off to do some depressingly worthless seeming A-Level work now.
Guess education never changes

Everything was going so well until I fucked my keyboard at the wall and now I'm reduced to using one which makes the comic shop ones look good.