So I recently bought

the ThunderCats DVD's, all 68 episodes of season 1 over 2 huge DVD box sets. Quite a lot to get through really. I never saw much ThunderCats as a kid, nor any cartoon, but those I did see I enjoyed. I never collected the toys either, my Mum had a weird thing about toys; whereas most kids had a little bit of each product, a mixed bag such as Lion-O, Prowl, Princess Leia and Skeletor, my Mum had this thing that we collected one thing. From birth to '85 it was Star Wars for me, and then when Star Wars went the way of the dodo it became Transformers. It was good really, because it meant I had a shitload of Star Wars and TFs as a kid and I really looked after them, I still have many of my boxed Transformers from when I was a kid, still with weapons.
So it was with a mixture of nostalgia and apprehension I inserted the ThunderCats DVD.
Now the intro sequence is still the best intro from any kids cartoon ever, better than He-Man, Bucky O Hare and even the Transformers (Ghostbusters was a close second though, for the music alone). And then the episode began.
It sucked.
They all sucked.

I managed to force myself through the first boxset, nearly inflicting a mental breakdown upon my girlfriend whom detests the shows voice-acting. I use the term "acting" very loosely.
Now Transformers wasn't the best cartoon ever but at least The Movie kicked ass, He-Man has aged really badly since its early-80's release, a lot of cartoons from the eighties look and feel dated for the very same reason 50's Superman comics seem so kooky: no-one expected people to still be analysing / reading / veiwing the material 20-50 years later. they were meant as nothing more than disposable kids entertainment, occasionally with a forced morality tale thrown in for good measure as our modern day Mount Olympian equivalents.
But seriously, ThunderCats is by far the worse. When you look at great voice-artists such as David Kaye, Gary Chalk, David Hayter, Mark Hamill and Kevin Conroy, you realise what a talent the profession takes, but the horrible voices in ThunderCats stagger belief.

Except this line from Mumm-ra.

The stories never seem to be thought out ahead of time, limping weakly from one scene to another without and thought to structure or plot cohesion, the rules of physics seem to change by the minute and THERE ARE SO MANY FUCKING UNICORNS IN ONE POXY UNIVERSE.
At least the villain was kind of cool, despite the use of such clever aliases as "Pumm-Ra".

Anyway, I am not here just to debunk T'Cats believe it or not, I actually have a point.

A lot of people remember ThunderCats with a lot of reverence. You go into any college in this country or America, you are pretty much likely to find some dude wearing the Thundercat logo as a T-shirt, beanie, hoodie or tattoo. Why? Why would they do this? 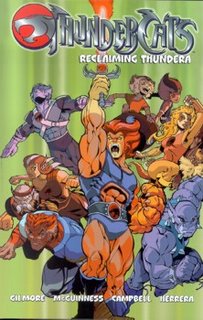 Simply because the product has remained nostalgic, and not been rehashed time and time again. Wildstorm recently published 5 Thundercat miniseries, 4 of the 5 were great, with brilliant writing and art by some of the top names in the industry (J. Scott Campbell, Ed McGuiness!!!, Ed Benes - read 'em and weep Marvel). DC told 5 short concise stories with a lot of reverence to the TV show, which actually progressed the characters and Universe, and then got out. Brilliant strategy.
That is it, as far as the great ThunderCats revival.

Compare that to Transformers. 3 ongoing Dreamwave series which contradicted the TV show, Movie and US and UK comic books , 4 or 5 miniseries, all of which got cancelled mid-story with no resolution due to Dreamwave's bankruptcy. New, watered down T series such as Energon and Armada which are playing to the Pokemon, Mighty Morphin power rangers crowd, not to its own pre-existing audience. More toy lines than you can possible hope to purchase even after two re-mortgages and a bank loan thank you very much Takara / Hasbro. T-shirts, posters, lunchboxes, stickers. A new comic series released by IDW, all of which seem to have a choice of anything from 3- 8 covers ranging from £1.60 to £100. Re-issues of expensive toys, which then affect the market price on the older toys. Annuals. Reprints of old comics. A sticker album?!? Cardboard cut-outs, statues from 3 different companys. Busts. Jigsaws. A live action movie. Complete DVD box sets of obscure Japanese episodes with really bad dubs. The list goes on and on almost as much as I do.
The same thing happened with Masters of the Universe, and Battle of the Planets, with new action figures, comics or TV shows which failed to capture the attention of today's "fast-edit" audiences or yesterdays nostalgia junkies (which is a shame because the new "Masters" show kicked ass, and the comic was written by Kirkman).

Yet people still talk about how great ThunderCats is. Because there has been no market saturation. No new action figures, no film, no soundtrack CD, no old comic reprints, no statues, no busts, no playsets.

So, like the last minute morals added on at the end of episodes of ThunderCats, we have learnt two things from this:

1, Never trust nostalgia, feel free to leave some things in the past. Like pogs.

2, More importantly, learn the error of market saturation. This is something Marvel have been seriously lacking with lately (see, it all comes back to comics in the end).

konbanwa from japan!!
hate me, go on hate me!!!
just thought while i was in the gera gera manga cafe id say hi!! *waves*

I used to FUCKING LOVE Thundercats as a kid, It was just under Ghostbusters on my "best things ever" list. Any one who still says they like it now is a total fucking cunt though and are lying to gain a retro cool.

Anyone who likes things from their childhood in an "ironic" way, whether they admit that or not, deserves to be beaten to death by a coal sack full of Samurai Jack DVDs, while someone kicks a dose of "sort your life out, you awful scenester wanker" into their shitty headface.

Of course, go give Comic Connections your money first, before this ritual begins.

It's JUST like this one, only less well written but A WHOLE LOT SEXXIER, YEAH!

Hey minimalism is my style bitch. A whole lot sexier my ass, you know; time's gonna tell on this one.

Hello Becky, hope all is good in the East.