It's been a long standing comic convention tradition that if you dress up, you get in free. So, in a desperate bid to save £12, some people do indeed dress up.
But not many.

You had a group of people dressed as Manga lolita's as part of a promotion for one of the manga companys that isn't Tokyopop, so they don't really count. [Incidentally, the head of Tokyopop sales department fears me, I asked him what's happened to Battle Royale shipments lately and he shat himself and started acting really defensive and submissive, whether he has been beaten up by a rabid Battle Royale fan before or not, I have no idea. And people say violence in comics doesn't affect people].

I really need pictures of Bristol.

The Best 3 people who dressed up at Bristol were:

3, Bloke - Actually, I have no idea who this guy was supposed to be. He was about 6 feet tall and 100lbs of boney aenemic skin, topless (which was disgusting) wearing a long black trenchcoat and cowboy hat. Anyone got any ideas? The only reason I think he was dressed up was because he was hanging out with #1 all weekend. Maybe he was a really bad white Blade?!?

2, Ash from Army of Darkness - Another 1oolb bag of flesh. But at least this guy made the effort and came both days in full get up. Including ripped shirt (featuring exposed white-milk Cadburys Button nipple), blood splatter, cardboard chainsaw, shotgun back-pack (boom-stick) and glasses. Amazing.

And the Winner...
1, Shit Spider-man. God, I wish I had taken photos of this guy. He was fat and mental looking, wearing: faded blue pyjama bottoms; a red pillow case over his head with shades underneath the cut-out eye holes (reflective shades, just like Spidey's mask); a homemade top with a homemade Spider-man logo redesign (I have recreated it, and it is scarily accurate, pictured below); 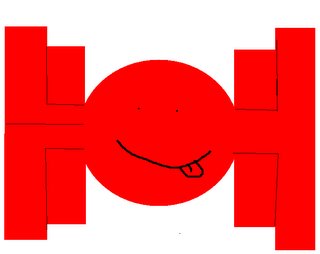 and because he couln't find the appropriate footwear, he wore bandages over his feet, you know, like the ninja do.
But the best thing about shit Spider-man? The walk. Man you could tell he'd practiced that, it was a half lean forward stomp, almost as if every pace he took could be the one were he fell over, but he just manages to stomp the foot in front of himself to regain balance.
It has just occured to me this could be his ACTUAL WALK, which is so much funnier.

If anyone, anywhere has pictures of shit Spider-man, I want them.
Posted by Sid at 12:18 pm

I think you were looking for this.