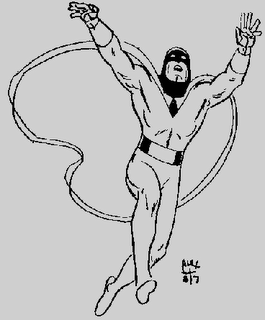 Alex Toth died yesterday, at his drawing board no less (which is kind of inspirational, and brought a smile to my face). Alex was a professional cartoonist. He began his career in comic strips and comic books but is best known for his animation designs for Hanna-Barbera throughout the 1960s and 1970s. His work with Iwao Takamoto included Superfriends, Jonny Quest and Space Ghost. Toth's work has been resurrected in the late-night, adult-themed spinoffs on Cartoon Network: Space Ghost: Coast to Coast and Sealab 2021. (sourced from Wikipedia)
Alex Toth has never been a creator I have followed that closely, but I have a few friends whom have really been influenced by his work over the years, especially his material on Space Ghost. I wish I knew more about his work so I could give you an honest appraisal, but alas I cannot read everything, and I would rather be honest and say I don't know enough about the guys work.
If you want to leave condolences to the family, you can here

Just about to read Grant Morrison's early batman story "Gothic", it's 16 years old now and it will be interesting to see how it holds up. I thought I should check this out before his forthcoming run on Batman, see how his grasp on the character has varied over the years from this, to Arkham Asylum and his JLA run.
Sometimes you get a clearer idea where artists are going to go if you see where they've been.

"52" is good, 3 issues in now and I am really enjoying it. I know a few comic shops are struggling to shift the book, with its curious marketing strategy / selling point being "No Batman, Superman or Wonder Woman" - who are the three DC characters that most people want to read about. thankfully, our customers and quite clued in to good creators and the DCU. So cheers guys for having good taste.

"Scott Pilgrim" vol. 2 was ace, just read it this morning and it had me laughing out loud at some points, which is very rare, it never ceases to impress me how much I have grown to like this book.
If you still havn't read this book, let me know and I will try to get some more of the FCBD specials in store.

Curious selling point (for me anyway) on the new "Family Guy" comic series from Devils Due, the art is partly handled by one of my all-time favourite indie creators: Rich Koslowski, who you should all remember from "3 Fingers" and "The King" (both available fromTop Shelf). Just thought it warranted mentioning.

More indie comics spotlight. Matt Boyces second book "More Humiliation / Robots in Love" is avilable in store now, kind of a double A side this one. Featuring more stories fro 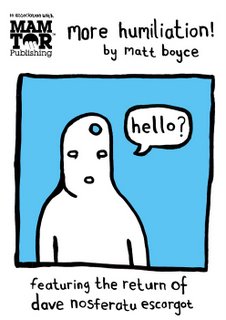 m the "Man wih the hole in the head" and "Dave Nosferatu escargo". Check out www.mattboyce.com for more details.

"Monkeys Might Puke" is another of my favouriote indie books, a small humour anthology published fairly sporadically by some UK creators. In many ways its shit, but they know its shit, which is why it works and tit makes it kind of endearing. The creators really can't draw, and there is no thought behind each issues design WHATSOEVER, but the humour in it is good, offbeat and fairly original.
£1 an issue buys you "Junkies in space", a strange ongoing tale abouts lamps and cheese and in more recent issues the Itchy and Scratchy parody "Einstein vs. That Danish Guy". Good fun stuff.

And finally, time to pimp my own stuff, I have been going on about my writing on the site for some time now but haven't really offered any for people to read. Until now. So, if you are at all interested, check out my three-part prose short "Horrorscope", by clicking here.
Posted by Sid at 5:33 pm