Me of little faith. 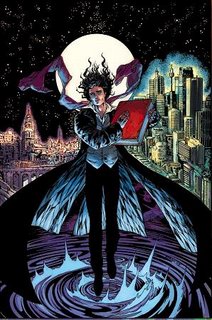 I should never have doubted.

About six months back the first issue of "Book of Lost souls" shipped from the Marvel Icon line. As far as I can tell this line of comics is purely Marvel printing comics that they don't want to print, that way no-one else can print them. It's a way of keeping excluisve freelancers happy such as Brian Michael Bendis and David Mack. The line flies in the face of everything Marvel as a company produce.

"Book of Lost Souls" was a no-brainer for me, it's written by J. Michael Straczynski - whom I'm sure you know is one of my many heroes and influences - with art by Coleen (A Distant Soil) Doran, an artist whose work I wasn't too familiar with. Still, I bought it because I buy many comics as is my want, and promptly filed it away in one of my many coffin boxes marked "to be read".
Six months pass, and with it six issues, which usually means a good chunk of comic to be read. I didn't really know what to expect from the book to be honest as I have adopted a trend of avoiding all publicity for books that I am definitely going to buy, but if I had really been looking forward to it like I did Rising Stars or Midnight Nation, I would have read it straight away. So I guess it was with a slight amount of trepidation that I sat down to read it.

Its amazing. The only comparison I can really make is with the early Neil Gaiman material, where you weren't quite sure why the writing was so important, but you ultimately knew it was. This is good stuff people.
The concept is purely a quiet battle between good and evil, where its not the Saints and Demons who are the deciding factor, but the people inbetween who have the real power, for they are the people who can sway the tides. It's an allegory for the voting system in a way, any American politician can quantify the votes of the public, x amount of people will go Republican, x amount of people will go with the Democrats, but the new voters or people who don't usually vote have all the power, if only they would step up to the plate and choose - it doesn't matter what they choose; as long as it's not apathy.

Its a book full of great questions, moments of choice and brilliant metaphors. This is everything I know JMS to be capable of as a writer, but unfortunately some people write him off as "that sci-fi TV show guy" or "the dude who made Gwen Stacy a whore".
There is a quiet power inherant in the man JMS (I had the good fortune to meet him, over ten years ago now), and it's that same quiet power I see in this book.
This could be the Sandman for the 21st century, it could be the flagship for a line to rival Vertigo, or it could be our dirty little secret. You can help decide.