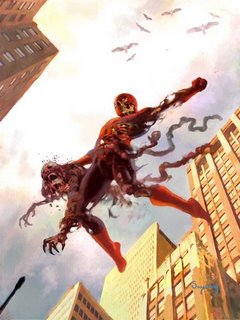 Do you like Zombies?
Do you like Comics?
If the answer to these is yes then you are probably familiar with Robert Kirkmans work on Walking Dead, and the fun 5-issue mini from Marvel that is Marvel Zombies.
The series wraps up next week, so the graphic novel can't be far behind. I emplore you all to read it as it is a heck of a lot of fun, and a nice break from the death/disease/famine/we're-all-going-to-die-horribly pace of titles like Infinite Crisis and Civil War.

But that's not what this column is about.

Thank you very much for the fun that was the recent 5-issue Robert Kirkman penned mini which was Marvel Zombies. It was a heck of a lot of fun. Cap with his brains hanging out, the Iron Torso Man, Wasp; the zombie head and the Silver Dinnerware Surfer. You can't beat that.

Let it end at that.

Everytime you have a series which recieves a modicum of success, you run it into the ground. Fact.
So many great things have started at Marvel, and you havn't known when to stop and it has ruined them.
Marvel Mangaverse. Dead from over-exposure.
MC2. Dead from early over-exposure, killed the "line" before it got going.
The second wave of recent What If's. With the exception of the Thor title; pointless.
Avengers Disassembled. Yes, Avengers 500-503 were great, but watered down due to pointless supposed "tie-ins" in F4, Iron Man and Spidey.
The "Tsunami" line of comics. WTF? Does anyone remember this launch. Namor??? at least it bought us Runaways.
Infinity gauntlet was ace. Did we need War, Crusade and Abyss?
Hulk The End one-shot was awesome. The same can't be said for the 18 issues of X-Men The End can it?

Probably already seen this but anyway...

Question asked of Bendis on Newsarama

JQ: Stay tuned, Berkovw, there’s a lot of Marvel Zombie news coming up, so much so that we’re going to have to put Marvel Apes on hold for now.

A lot of news?!!
All we need is a trage or hardback collecting the original issues, the varient covers and maybe an interview and a script or two.
Guess your predictions going to be right...

Hi, Nice stuff. I found a cool news widget for our blogs at www.widgetmate.com. Now I can show the latest news on my blog. Worked like a breeze.