So what do Transmetropolitan, Planetary and Authority all have in common?
Other than Ellis? 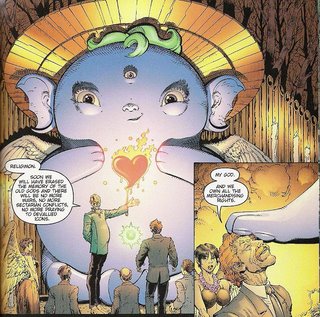 The common link is the first time I read any of them I didn't like them. In fact, Authority I downright hated, finding it irreverant to my superhero sensibilities. I thought Planetary was insipid and found Transmet to be irrelevant gibberish.
But then again, there was a time I didn't like the band Faith No More, so what do I know?

Yet these three books I now look upon as being books that changed the industry. Transmet was an important socio-political cautionary tale which (along with Ennis' Preacher) set the tone for finite series in an ongoing market, with emphasis on long-term bookshelf sales rather than single issue market dominance. Authority was two fingers up to the establishment, putting the spotlight on everything right and wrong about superhero comics in a way which made the entire industry stand up and pay attention (even the cynics, as Millar pointed out in the final issue). Wheras Planetary is the subtle rediscovery of the superhero idiosyncrasy, putting the wonder and marvel back into comics after generations of pointless watered down "super"-hero spin-offs have slowly diluted the pond.
I mean, whats so Super about believing a man can fly if everyone in the entire shared universe can? A point which Earth X and Kingdom Come hypothesised.

Scott Pilgrim is a book which has the capacity to change the industry, and I already know some comic shops to whom it's there best seller. Not best-selling quirky indie title, but best selling comic. Ever. Above 52, Civil War, Age of Apocalypse, Spawn, Malibu, Valiant variants, Watchmen, V for Vendetta or Dark Knight Returns. Yet in my shop its an incredibly hard sell. Why is this?
Partly because we are so crammed with stock its difficult to make little Scott Pilgrim stand out, needing a case of less is more to focus peoples attention on this great little gem.
Partly because its 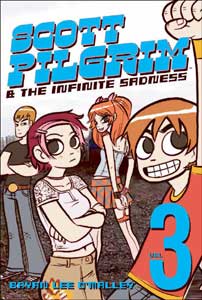 not super-hero, yet its definatly quirky and its anything but dull. To coin an already out-dated phrase, it's part Fight Comics (TM Warren Ellis) part romance comic, with a healthy dose of pop-culture adrenalyn injected directly into its heart.
Scott Pilgrim has the capacity to change the industry because it IS bringing in new readers, whom are both young and of mixed gender. No industry can survive without new blood which is something that mainstream comics and video games are feeling the sting of, by refusing to cater to anyone other than the hardcore established niche.
It's a small, attractively priced package yet dense with material and re-readability. It has a clear cut purpose with Scott's mission being to fight all his girlfriends evil ex's, one of whom it has been implied was a girl.
Its the perfect size to lend to a mate without it coming back trashed, you can read it on a train, slip it in your pocket, hell...it will even survive a hardcore gig.

Like any industry, the real progressive changes in comics are made in the dark corners where the consumers aren't looking. But you know who is looking? The industry professionals, many of whom will try to emulate Bryan Lee O'Malley's stylistic content to lesser effect in there own books, but it will come off cheap and stilted. Why settle for the rip-offs when you can be there at the begining? You might think you don't like it at first, but 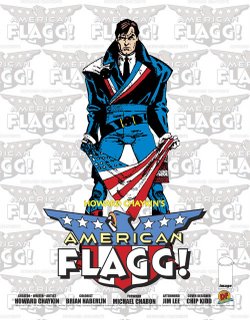 I guarantee in time you will see why its such a great book.
And you know what, if you don't like it straight away that's fine, because you know you wish your mates read comics but you're too embarrassed to lend your mate the X-Men or Teen Titans? You can bet they'd get a chuckle from Scott Pilgrim. If they have a soul.

You know what comic I've just started reading? Howard Chaykins American Flagg,
it was a comic being made in the dark corners of the insutry during the birth of the direct market that no-one noticed, no-one except all of todays most prolific creators.
Although, to be honest so far I can't say I've overly impressed.
I can't wait to tell you how much I love it in a few months.
Posted by Sid at 12:28 pm

hey dude can i borrow them american flagg's? after i have read everything else you give me ;P

I'll probably buy Scott Pilgrim on my next trip to your shop.